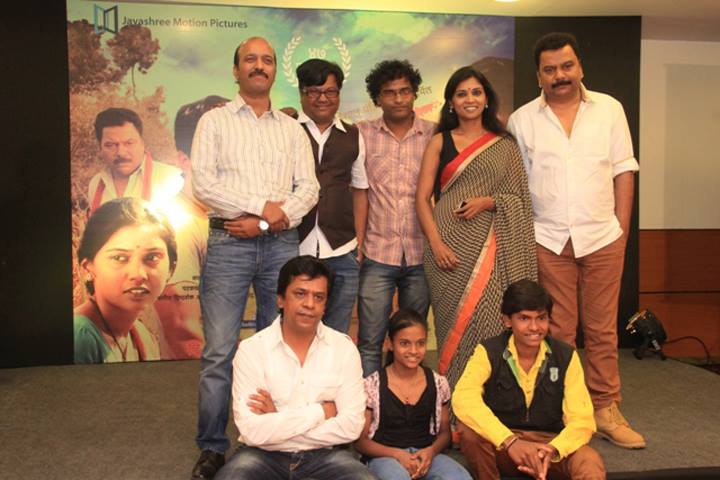 The entire team of technicians and artists of Dhag were present during the recent press conference in Mumbai. “Nitin Dixit first told me this script on a tea stall and that was the moment I confirmed to do this movie. Honestly accept Upendra and Nagesh entire team is new. First time when this movie was screened at Goa Film Festival we received very positive response from the audience. Post than; Dhag kept on climbing ladders receiving several awards on National and International level. I’ve received strong support from everyone in the team while making this movie. I hope this movie to get equally positive response on box-office”, said producer Vishal Pandit Gavare.

“Till date wherever Dhag was screened on various occasion, we got a common reply of great story including judge panels from various festival to eminent personalities. Everyone has given their best and the performance of each artist is apt to the story, making this movie truly a world class cinema”, said actress Usha Jadhav.

“Nitin Dixit is not only a great writer but a very dear friend to me. Everyone has given their share of best because of which the end result is paramount. I would like to give my special thanks to Vishal to accept such fine story as producer and make wonders of it”, said Upendra Limaye.

The story of the film Dhag is of a young boy wanting to break the successions of traditional jobs of the family in village where Upendra Limaye, Usha Jadhav, Nagesh Bhosle, Suhasini Deshpande, Hansraj Jagtap, Neha Dakhinkar has enacted in this movie. Story, screenplay and dialogue is by Nitin Dixit, Cinematographer Nagraj Divakar, and song written by Shiv Kadam which was beautifully sung by Aadi Ramchandra on the background music by Sunil Kaushik.

Coming March 7th, Dhag will be released across Maharashtra.