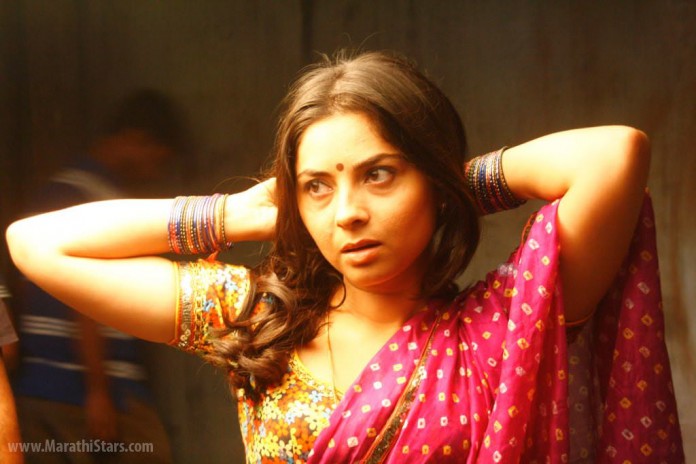 Sonalee Kulkarni, a diva on screen seems to know the pulse of audience very well. The girl who started as a glamorous doll has been trying to change her image as a serious actress. Her last releases Classmates and Mitwaa were sensational hits and her work was appreciated by critics and the audience. Sonalee is ready with her next release “Shutter”. Directed by a National Award winner Malayalam director VK Prakash, Shutter is an unusual story of relationships. Marathistars.com spoke with Sonalee about her this new release.

Shutter is a Malayalam remake of the same name. Can you tell something more about this film?

Ans: It is a family entertainer. It is about relationships around us in society. The film talks about trying and opening the shutter of your closed and then how it changes your perspective.
The film has a very interesting story, directed by VK Prakash. He is a national award winner from Malayalam cinema. The most of the crew is from Malayalam industry, and actors are Marathi. The story revolves around me and Sachin who gets stuck in a shutter for complete 24 hours. Sachin khedekar plays a role of a very reserved and family man, he gets stuck with this prostitute. What happens inside that shutter is a mystery, obviously audience have to come and watch the cinema.

Tell us about your role in this film. 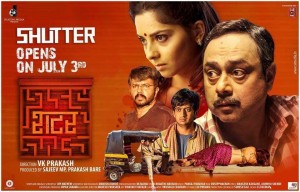 Ans: I am playing a roadside prostitute; she is not a very high-end expensive call girl, neither a filmy type hookers with too much cheap makeup or chamcham sarees. She is a very simple, decent looking, wearing a 400 rupees saree and not too much blingy makeup. This was very interesting look for me, because as a prostitute I had to look decent and not raunchy. My previous roles required me to look glamorous here I have tried not to look glamorous, but like a normal girl. I have never played something like this earlier.

How did u prepare for this role?

Ans: Various films have portrayed prostitute as a very glamorous and raunchy but our director is keen about being very realistic and not larger than life cinema. So he insisted I should look for a very normal girl who we might come across in everyday life at late night in some shoddy city corners. Also, I started observing these girls. We generally not even look at such girls, but I observed them. Best part about my look was I hardly did any makeup. Once my character goes inside that shutter I barely have any time to comb my hair or do touch up. My character becomes slightly claustrophobic so my look initially is very prim and clean but becomes very shabby afterwards.

How was your experience working with Amey Wagh?

Ans: We became very good friend on the sets. This is first time I am working with him. In the film we have a very tom-and-jerry kind of relationship. Si it was really fun working with him. We both are of same generation so we used to talk about many things. We used to share a lot, discuss about many things. He really appreciated my work and also gave me some tips about acting. I am really happy about his success in Dil Dosti Duniyadari. He is a gem of an actor. 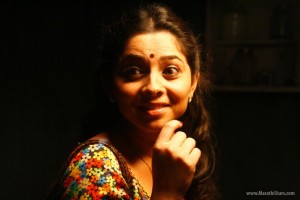 Also, this is your first film with Sachin Khedekar.

Ans: With Sachin Khedekar it was a different equation all together. We all used to go quiet on the sets when he was working. He comes across as a very silent and disciplined man. However, as a costar he is amazing. He is an institution and has done tremendous work. He is working in the industry for past two decades but he never throws that attitude. As a co-star I was really comfortable as he knows what he is doing. I really got to learn a lot from him. We worked on two camera setup. So I had to react simultaneously when he was saying his lines. So when such a brilliant actor is acting in front of you, your job becomes very easy and natural. Unknowingly you start reacting so that small actions or reactions make such a great difference.

As you said this was more of a Malayalam crew, did you find any differences between these two industries in term of how they function?

Ans: Clearly there are different aspects as work culture but ultimately film making remains same. The approach might change. I enjoyed it because it was a different type of work, VKP, our director is very natural. He insisted on not too many rehearsals or takes. He believes in spontaneity. His work is very realistic yet quick. We finished the entire film in 15 days that too without any compromises and without any technical hitches. So it was great to work with this crew.

How was the experience while working with Sachin and Amey as both of them has theatre background?

Ans: I have worked with many actors who have done theatre. I have worked with people who have done different school of acting. We used to read a script and discuss our scenes before the actual shoot. Stage and cinema are quiet different mediums. Sometimes for cinema when you rehearse too much your spontaneity is gone and becomes monotonous. Hence, we tried to keep it very impromptu. I have not got any professional training neither I have done theatre. So in a way, I am very flexible and adaptive to different schools of acting. I can work with an actor who wish to do ten rehearsals and same way I can also work with an actor who wants to give a shot without rehearsing.

Right from your first film Bakula Namdev to Shutter, you have done various roles. How much you have grown as an actor?

Ans: You grow every day, not only as an actor but also as a person. I think acting is directly proportional to who you are as a human being and where you are heading. I was a mere kid of 16 when I started acting now I am older, so all these experiences cumulatively add into my work. I have definitely grown in maturity and emotionally, so that reflects in my acting as well. As years pass by I get to understand life more and people more. Cinema is all about people we meet every day.

Shutter is a remake of a Malayalam film. Many Marathi movies are being made in other regional languages. What do you think about this trend?

Ans: See, eventually our Indian society is same. Languages might be different, but ethos is same. Marathi and Malayalam might seem very different languages but our cultures and traditions are very similar. Above all, human emotions and reaction are same all around the world- love, betrayals, pain, hope; they remain same in entire world. “Classmates” was also remake of a Malayalam film, but it has done well here in Maharashtra. Our cinema is growing and reaching all over the world, it really feels good. People want to see this film in their languages which is amazing and I feel very proud to be associated with this industry. We have been making some great films in the past decade. We have a larger audience so why not reach this audience in their language. It is a beautiful exchange of ideas between us.

What is your fitness mantra?

Ans: I do nothing specific about dieting. I believe in healthy eating. Ever since I realized how fitness and health is important in my life I try to eat healthy at regular intervals. I am not fond of very spicy food. I prefer simple, balanced home-cooked food. I work out regularly. I do different type of exercises. My mantra will be doo whatever as an exercise, but do it regularly. Following a routine is very important.