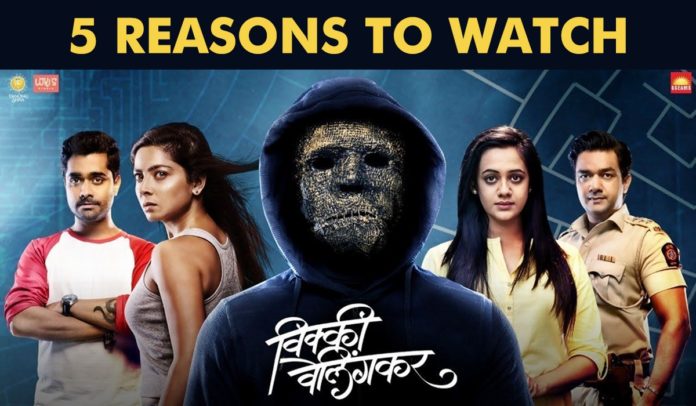 The highly awaited Sonalee Kulkarni starrer ‘Vicky Velingkar’  released by producers Arjun Singgh Baran and Kartk D Nishandar of GSEAMS in association with presenters Pranay Chokshi and Dancing Shiva Production is all set to hit the theatres this friday! We list out top 5 reasons to not miss the film in theatres!

Marathi audiences today demand more than just romantic dramas or family dramas or comedies from Marathi cinema. This search for variety can be answered by ‘Vicky Velingkar’ which is a fast paced action thriller and promises to keep the audiences on the edge of their seat throughout.

In the trailer of the film we can see a mysterious mask man as the evil hacker who is doing some harm to our protagonist. Today’s audiences are very much aware of such cyber crimes and hence would easily relate with the backdrop of the film.

In recent times we have seen quite a few Marathi filmmakers making the transition from Marathi cinema to Bollywood, but even Bollywood filmmakers are equally attracted towards Marathi cinema. Saurabh Vermawho made the cult Bollywood hit ‘Mickey Virus’ has entered Marathi cinema with ‘Vicky Velingkar’ and surely there are expectations from him!

‘Vicky Velingkar’ seems like a film that should be compulsorily enjoyed in theatres on the big screen! Certain films are made for the big screen and their impact can be felt more effectively in theatres alone!

Along with Sonalee Kulkarni in the titular role the film also stars talented actors like Spruha Joshi, Sangram Samel, Gaurav More & Vinita Kharat! All their characters seem to perfectly fit them and feels like everyone has their share of importance in the story of the film.