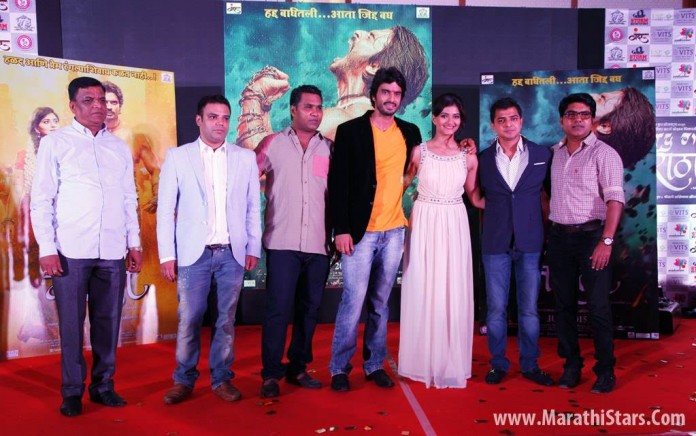 Selfless love stories have always been a part of good cinema and may it be in any languages or any states, the audiences have always loved this genre, and such an unique love story is ‘Carry on Maratha’ which explores the rift between Maharashtra and Karnataka on the backdrop of a love story. The first look of the film was recently launched in a grand style at THE CLUB, Andheri which dazzled everyone present.

The lead character of the film Martand played by the handsome and hunky Gashmeer Mahajani came on the dais along with leading lady Kashmira Kulkarni and performed some songs from the film. The film is a love story between Martand played by Gashmeer who makes his Marathi film debut along with Kusum a Karnataki girl in the film played by debutant Kashmira Kulkarni. The film produced by Nanda Arts and Warrier Brothers Motion Pictures is directed by debutant director Sanjay Londhe . Nanda Chanrabhan Thakur of Nanda Pictures and Shashikala Ksheersagar of ‘Warrier Brothers Pictures’ said on the occasion ” This film is a potpourri of clean entertainment and the good direction by Sanjay Londhe and the excellent performances by the lead cast is the highlight of the film and will bring the audiences to the theatres”.

Director Sanjay Londhe further said, ” many films with different content have come about recently but CARRY ON MARATHA is a complete entertainer and the film has been shot on many breathtaking locations of Karnataka and Maharashtra and I am debuting as a director with this film after being in the industry for the last 15 years and assisting directors behind the camera like Abbas-Mustaan , Priyadarshan, Ashutosh Gowarikar, Nikhil Advani, etc which gave me a lot of experience and the influences of these great directors can be seen in my work”.

Shail and Pritesh have scored the music of the film with lyrics Guru Thakur, Mangesh Kankane, Ashwini Shende and Hridyesh Shiva and playback by singers like Shreya Ghoshal, Vaishali Made, Shail Handa, Urmilla Dhangar etc. The DOP is Arun Prasad, choreographers are Raju Khan, Adil Sheikh and Sujit Kumar. A Horde of actors from Karnataka and Maharashtra are in the film and some prominent names are Arun Nalawde, Amin Hajee, Kareem Hajee, Kishori Ballal, Usha Naik, Shantanu Moghe, Devika Daftardar, Omkar Kulkarni, Sameer Khadekar, Amey Kumbhar and Sachin Deshpande. The action is by Kaushal- Moses. The film releases in July 2015.