After a series of the hit Marathi films in the last few years, producers Arjun Singgh Baran and Kartk D Nishandar in association with Lion Crown Entertainment, Govind Ubhe, N.Anupama and Kanchan Patil are all set to hit the silver screen with one more Marathi film BONUS , which will be released Maharashtra on February 28, 2020. Presented by Lion Crown entertainment and GSEAMS, Written and Directed by Saurabh Bhave, the film will have Gashmeer Mahajani and Pooja Sawant in lead roles. The poster of the film released today. 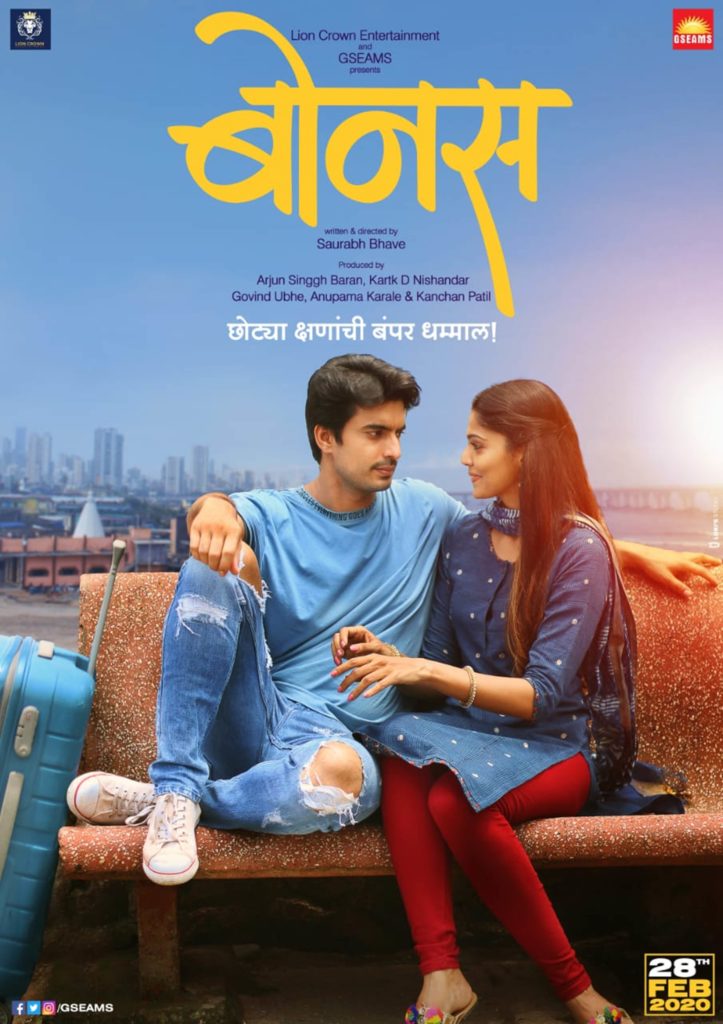 The poster of the Bonus gives us a slight hint of what to expect. Featuring Gashmeer Mahajani and Pooja Sawant, the poster has a backdrop of the vibrant and colourful Koliwada with the lead actors standing in a romantic pose. What stands out is the suitcase in Gashmeer’s hand. The poster has raised curiosity about the film and the chemistry between Gashmeer and Pooja who are pairing up on the big screen for the first time.

Bonus, an award for audacity, is being talked about by the Marathi film audience for its glamorous star cast and the subject handled by the director. Handsome hunk Gashmeer Mahajani, in a very short span of his career, has carved a niche for himself with his recent films Deool Band, Kanha, One Way Ticket and Mala Kahich Problem Nahi.

Pooja, one fo the most beautiful actresses in Marathi to have done many popular films such as Daagdi Chawl, Vrundavan, Poshter Boyz, Lapachhapi, Junglee is in the main role.

The film is directed by well known young directed Saurabh Bhave, who is also been appreciated for his skills in screenplay and writing. He had penned screenplay for many hit Marathi films including Haapus, Taryanche Bait, Hrudayantar, Chumbak among others.

Saurabh Bhave says “Bonus is that extra bit that we all deserve.. Extra bit of money, joy and happiness, But Unfortunately some people are too privileged and some are not. Bonus tries to bring these two worlds together – The world of Haves and Have Nots. He adds that Bonus Is the joyride journey of a boy who in process of providing his worth encounters with the whole new world that changes his life and beliefs upside down… it is story of his coming of age

“As the title suggests, it is about courage, audacity and the path differently treaded.Bonus will be another film which will keep our tradition of powerful story and star cast as witnessed in our previous films,” say Arjun Singgh Baran and Kartk D Nishandar of GSEAMS.

GSEAMS, is a leading company in entertainment sector, had earlier produced Fugay, Tula Kalnaar Nahi, Ranangan, Vicky Velingkar and presented films like Bhikari. GSEAMS is one of the top studios in Maharashtra having its vertical spread across film productions and presentation, TV productions, talent management, movie marketing and promotion and satellite syndication.