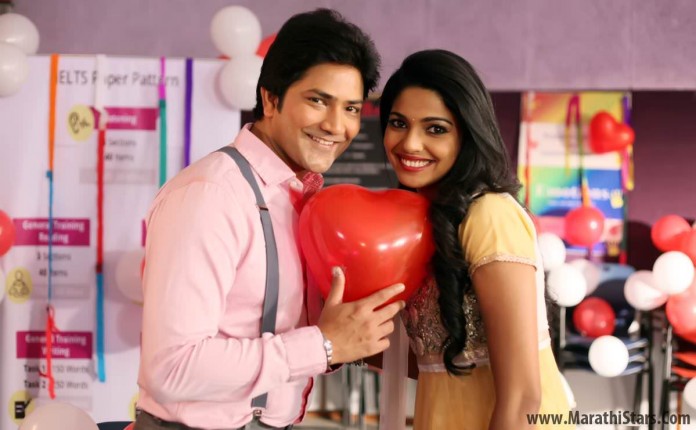 Under the aegis of Sukarma Productions and producers Sanjay Mehta and Umesh Jangam, written and directed by Ashish Bhalekar the film ‘Story Hay Pan Khari Hay’ is progressing fast in Mumbai schedules and after much speculation as to who will be cast as the leading lady opposite the hero Aniket Vishwasrao, it is now confirmed that Pooja Sawant has been cast opposite Aniket as the heroine in the film. And now the popular star pair will entertain the audiences again.

Spekaing about her role in the film, Pooja says, ” The film ‘s subject is indeed different and from and my character is multi-layered and my journey in the film is from a chawl girl to a successful corporate excecutive. There are many sub plots in the film and writer Umesh Jangam has incorporated it beautifully and director Ashish Pawar who has lot of experience in the Hindi film industry has put all his experience in the film which is evident in the very fine final product.

Aniket Vishwasrao says, ” I accepted this film because of it’s different story line and the thrilling climax and I play a rich industrialists son who vows to make it big on his own principles in life and that is ‘STORY HAY PAN KHARI HAY’which will convey a message to today’s youth and I accepted this film because I wanted to break my chocolate boy image and I am eagerly awaiting the film release as you all are”.

Director Ashish Pawar says, ” The story of the film is revealed in the title itself and the events may take place in any persons day to day life and I once again reiterate that the film is about ‘STORY HAY PAN KHARI HAY because the situations are a part of everyone’s day to day life and is a true story. The film has four songs composed by Chinar Mahesh. The film also stars Vaibhav Mangle, Asha Shelar, Rajesh Bhosle, Namrata Awate, Nitin Jadhav, Yogini Pofle, and Smita Dongre in key roles.