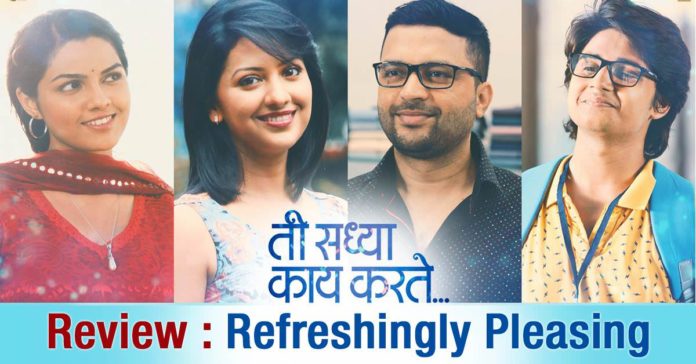 First things first, ‘Ti Saddhya Kay Karte’ is to Marathi Cinema what ‘The Shawshank Redemption’ was to Hollywood! Confused? Well it’s about using voice-over narrations! It’s not the first time that a Marathi film is using voice-over narration from the lead character, but it never made so much sense & added so much to the film! ‘Anurag’ voiced & played by the smashing Ankush Chaudhari justifies why this film is unusually titled ‘Ti Saddhya Kay Karte’. Yes this film is all about the “guy” & avoids perspectives from any other character in the film. 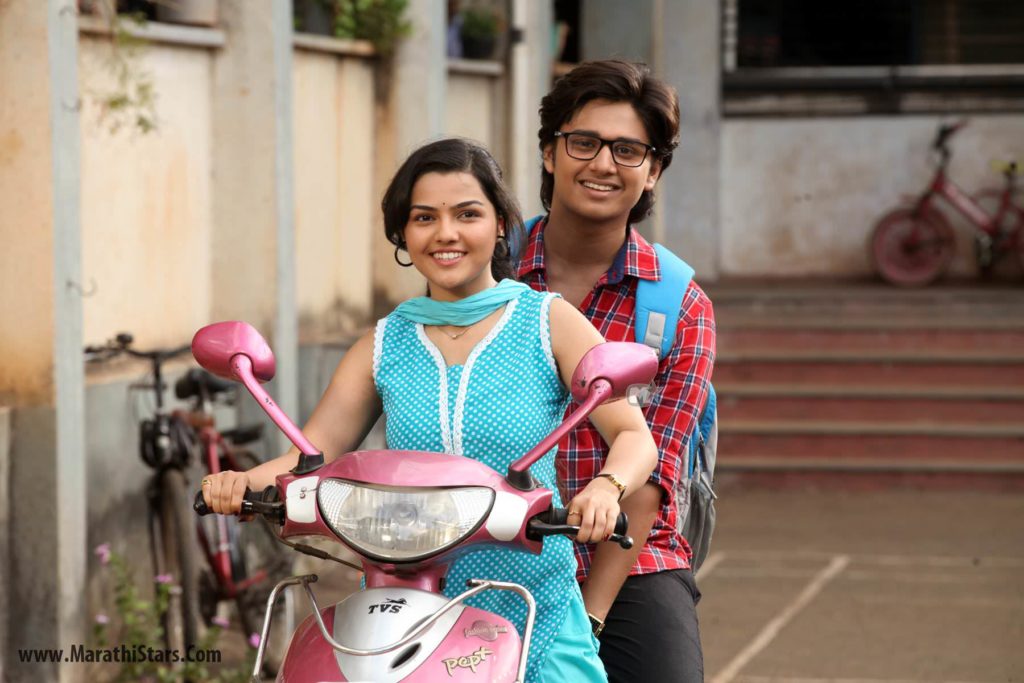 The first 15-20 minutes that are based on Anurag’s childhood are simply magical. Rajwade lingers on the little details which other films in Marathi before never paid heed to. Especially 90s kids will experience a euphoric wave of nostalgia in these 15-20 minutes. What was it like to fall in love? What was it like to compete for it? & what was it like to feel possessive about it & finally taking it for granted! Comparatively the rest of the film never matches this terrific start.

The weakest link of ‘Ti Saddhya..’ are both the debutants Arya Ambekar & Abhinay Berde. From overall body language to dialogue delivery they struggle, especially the singer-turned-actress. However the director doesn’t let them spoil the film except for one important scene. That important scene is supposedly the only scene in the film that creates a conflict. The rest of the film doesn’t really aspire for any conflict of sort but manages to please us. Yes the patent ‘light-hearted’ feel is ever present in this Rajwade film too. 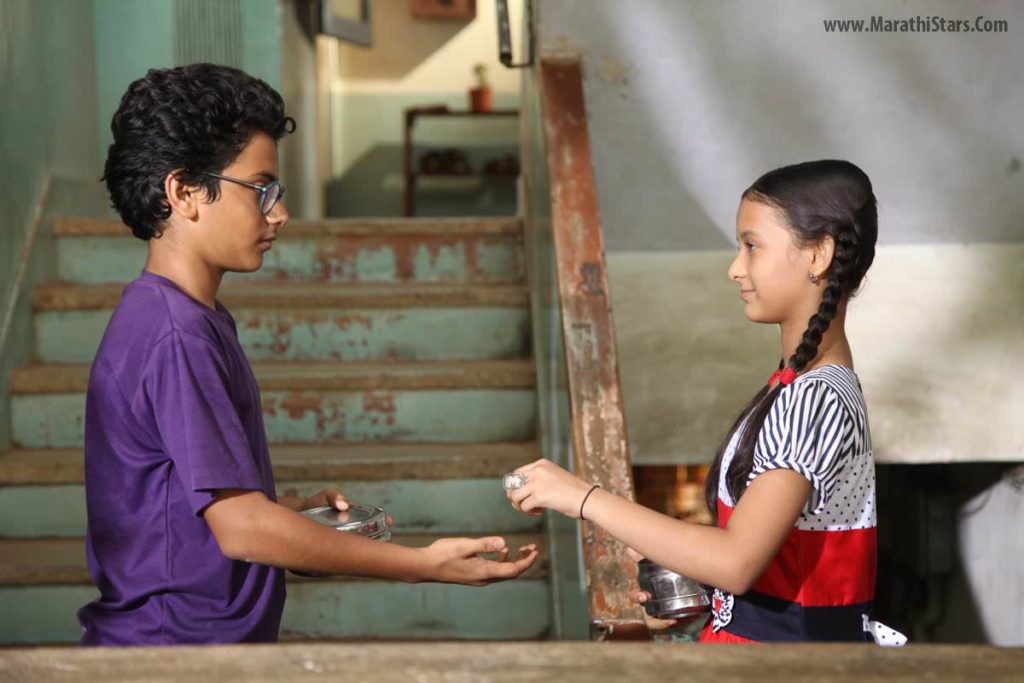 Another flaw that hurts the film a bit is the stark differences in Anurag’s & Tanvi’s characters. Both these characters are portrayed by three different actors respectively representing three different stages of their lives. Unfortunately nothing in the way they react or behave or even look suggest us that they are the same person. The overall look of these actors too stays superficial & daily-soap like, a flaw that is ever present in almost all of Rajwade’s films. But the overall point that it makes & the content of this film makes us ignore most of these flaws.

This film provides a refreshing take on lost love. Like many Bollywood films it equates friendship with love, but in a rather complex way. There is no big suspense as such but we prefer not to talk about the ‘twist’ in this film. Ankush is smooth & extremely comfortable playing ‘Anurag’, his voiceover is beautifully crisp & adds flavor to otherwise average scenes, but the voiceover is masterfully avoided in some scenes too! Lengthwise Tejashri Pradhan has a smaller role but it’s her best performance on the silver screen by a distance. Her deliberate restrained approach to her performance makes sense & adds depth to her character. The little kids Hruditya & Nirmohee are perfectly casted & have given beautiful performances, much better than their teenage versions! The music is in safe hands & is hummable. 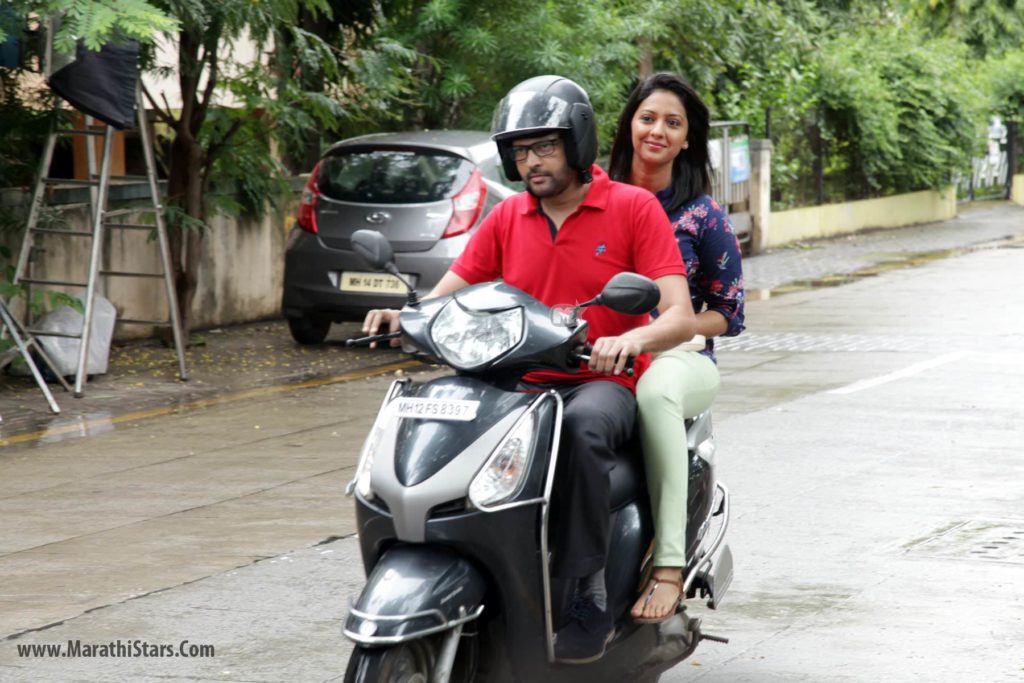 The best thing about ‘Ti Saddhya..’ is its uncertain nature. There is no formula to this film. It has its own little journey of sorts. For some audience this can be a turn-off as they could not relate it to their definition of ‘romance’ or ‘entertainment’. But for those who are patient & receptive this film will have a soothing effect. The final little conversation between ‘Anurag’ & ‘Tanvi’ simplifies many aspects about love, friendship & the idea of togetherness. We know it, it’s called cinematic liberty! It might not happen in real life, but that’s one of the reasons why films are made!

Along with Satish Rajwade this film also reflects the vision of Manaswini Lata Ravindra, the screenplay & dialogue writer. She deserves a fair share of credit for this film. We want her to write in the mainstream more regularly now!

Watching ‘Ti Saddhya Kay Karte’ is a beautiful way to start your new year! Watch it with your loved ones. You might share few sweet memories about each other post the film!