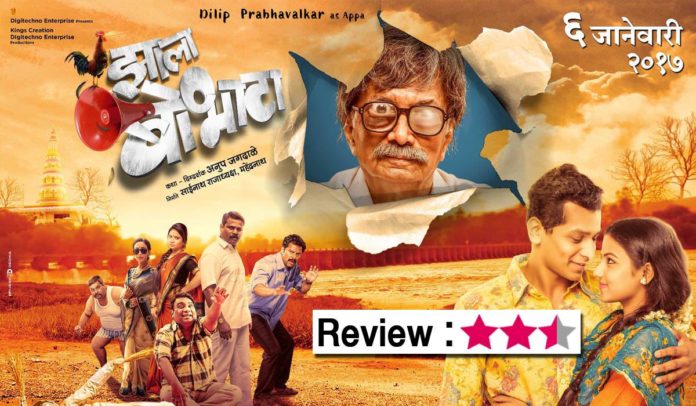 Marathi cinema has a long history of typical social comedies based in the rural setting. In recent times too there have been lots of films that aspire to explore this style. Most of these movies are technical disasters & are filled with loud background scores, double meaning dialogues & absolutely no sense of cinematic vision. In case of ‘Zhalla Bobhata’ it’s definitely not a technical disaster. Yes the background score is equally irritating & loud, but the editing, cinematography & continuity is surprisingly decent. Maybe it’s Dilip Prabhawalkar’s credibility that reflects here. The first half is filled with certain humorous scenes that are supposed to make you laugh no matter how hard you try to pretend.

The problem as always is with the second half. A story of a good for nothing village has been rounded off quite abruptly with a dosage of social awareness. Dilip Prabhawalkar’s Appa is an elderly man who is visibly a madcap but is sort of the only responsible citizen of this village. He executes a childish plan to make the whole village realize the importance of hard work & other ‘ideal’ aspects for a community.

Among other actors the longest screen time is bagged by Kamlesh Sawant as the Sarpanch of this village. Kamlesh Sawant has been playing the same role since ages & so he is impressive in it. There is a romantic track inspired heavily by ‘Sairat’ that has been woven with the conflict of this film. One song that reminds us of the ‘Sairat’ soundtrack actually is shot beautifully & it’s worth watching in a theatre. Mayuresh Pem is a talented young actor who gets an interesting opportunity in this film. Among others Sanjay Khapre is genuinely funny in the first half but is criminally underused in the second.

Dilip Prabhawalkar is used as a vehicle both for the plot & the actual film. He hasn’t got much to do in his role but whatever he does he does it the best way it can. Bhau Kadam has an aura of sorts now, so he has been used assuming that the audiences will burst into laughter hjust by watching him onscreen. Sadly nothing of that happens but Bhau still has it’s moments in the film.

The film is considerable predominantly because of Arvind Jagtap’s writing. That encompasses a remark on the concept of adultery & how our priorities as a community are so stupidly wrong. ‘Kon Ahe Re Tikde’ was his best work till date which was a madcap political, social satire. This film wishes to be a satire but gives away at crucial points. It’s funny nevertheless.

If you enjoy typical rural humor of our Marathi films or maybe you’re in a mood for some mindless fun, ‘Zhalla Bobhata’ might just suit you.