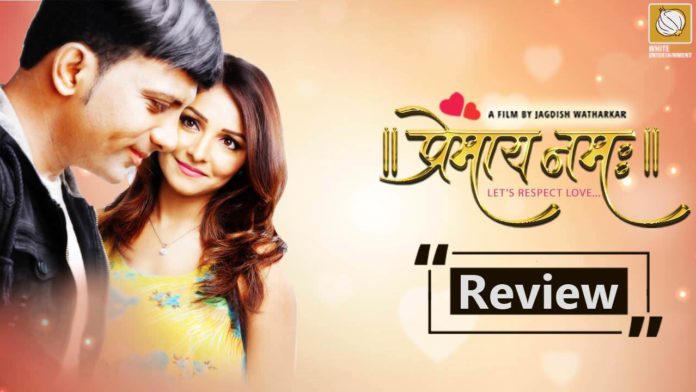 Premay Namah stars a hero who is impossible to tolerate. Not just because the actor is incompetent, but also because this ‘hero’ represents everything that the quintessential ‘Bollywood’ hero stood far, but in the most irritating & plain moronic way. There are visible tributes to a whole list of Bollywood heroes from Dev Anand to Salman & Shahrukh Khan! And a whole lot of Bollywood films from the 90s!

Prem (Devendra Chougule) falls in love with Preeti (Rupali Krushnarav). And then he keeps stalking her, because he thinks it’s true love. At one point when the girl keeps opposing his direct marriage proposal, Prem says he’ll forcefully marry her only if they meet again by coincidence.

Of course without coincidence, there won’t be a plot to this film. Slowly the film turns to a ‘Rajashri style’ family drama & still keeping the one-sided love track alive. The whole one-sided love track also directly shows resemblance with the recent Bollywood film, Ae Dil Hai Mushkil. The actors who play the parents of the hero & heroine are known faces from television & others films, but they too couldn’t manage to interest us one bit.

Most of the times such films have plenty of songs almost every 15-20 minutes, but we realized todaythat actually those songs give you a moment to breathe! In case of ‘Premay Namaha’ after the first song for almost more than 40 minutes we keep anticipating a song that can give us a moment to feel a bit better. By the time the second song arrives, it’s almost too late. The bg score of this film is not just loud but also contrary to the scenes on many occasions. Sometimes there are two kinds of bg scores at the same moment. It might be because they don’t want to manipulate their audiences! And there are inspiration in the bg too!

However, the problem is not the inspirations, in a way we can be fine with it, the problem is the execution. The acting too is simply intolerable. A few films that are badly executed can have a certain charm of being ‘so bad that they’re good’. Premay Namah is far from it. There is nothing that is enjoyable, even the ‘in your face’ action scenes are tasteless & not even ridiculous enough to be enjoyed with a satirical humour.

The end of the film though is a bit unexpected, though still not decent enough to improve the film in any possible way. It’s just that you didn’t expect the film to actually have something to say. Is that something strong enough to be heard? Yes, but for that watching the whole film would be like going through a 3 month jail sentence to earn a 200rs voucher from a nearby shopping mall!

It’s not difficult to understand that such films are made with extreme self-confidence. Films like these & the people who make them are not yet over the 90s hangover of Bollywood. A hero centric love story filled with some other filmy ‘masala’ is no longer a staple for any kind of audiences today. If at all there is any audience of that sort, the south Indian dubbed films are providing enough content with better commercial value to them.

2017 is truly having a difficult start for Marathi Cinema. There was merely one film that has truly clicked with the audiences & a couple of decent attempts. Hopefully in the coming weeks & months of 2017 Marathi Cinema will blossom again.

If under any circumstances you happen to watch Premay Namaha, you’ll realize it’s a film that you shouldn’t recommend to even the fiercest of your enemies, let alone your dear& loved ones.