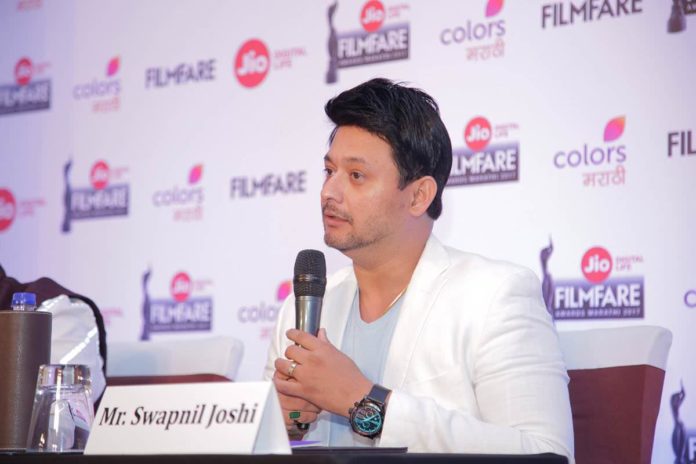 Jio Filmfare Awards Marathi is back with its third edition to honor and celebrate the best in Marathi cinema. In a press conference held today at Mumbai, Jitesh Pillai – Editor, Filmfare along with renowned Marathi actor Swwapnil Joshi announced 27th October, 2017 as the date for the prestigious award ceremony. The same will be televised on Colors Marathi at a later date.

Actor Swwapnil Joshi who was present at the press conference commented, “Marathi cinema has proved to be the perfect blend of commerce and arts. Especially in the past three years, the Marathi cinema has strategically not only prospered in mainstream cinema, but also experimental cinema. Filmfare has always been synonymous to cinema since its inception and has always given Marathi cinema the acknowledgment it deserves.”

Nikhil Sane – Channel Head Viacom18, COLORS Marathi said, “Marathi cinema is acclaimed for its intense storytelling, superlative performances and superior production quality. It is this very spirit of Marathi cinema that we will be celebrating at the Filmfare Awards Marathi 2017. We are delighted to be the broadcast partners yet again with Filmfare Awards Marathi 2017, an illustrious award ceremony that felicitates actors, producers, directors and other technicians alike for their contribution to the industry.”

Jio Filmfare Award Marathi 2017 will once again bring together the who’s who of Marathi cinema under one roof. The event is sure to set a new benchmark as it promises to put together a spell-binding show that will acknowledge and applaud excellence in the Marathi film industry.