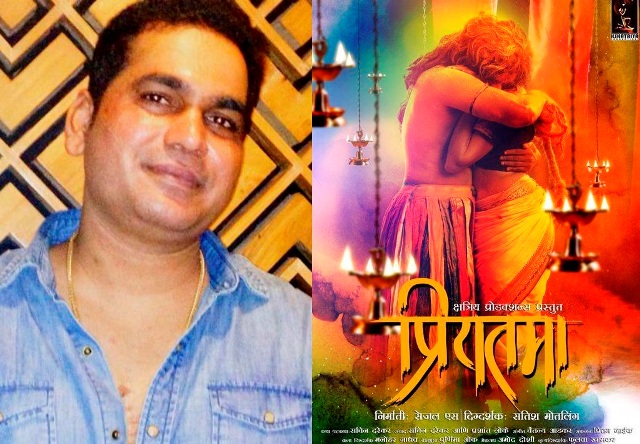 Now here’s a Marathi film maker Satish Vinayak Motling who is trying real hard to get the attention of iconic film maker Sanjay Leela Bhansali with his wannabe Marathi Film titled Priyatama. Satish not only tried to shoot his film like the way SLB does, But also went ahead and made similar looking Posters for his film. Yes! Priyatama’s poster draws huge resemblance with SLB’s Ram Leela’s poster.

When asked about these resemblances, Satish quoted to a leading publication “I loved the way SLB has presented his film. The chemistry between the lead pair, the colourful backdrop, it was all amazing. My love story will also be on similar lines. Girija Joshi will be the lead actor.” But the maverick film maker Sanjay Leela Bhansali has yet not thought of giving any importance to Satish’s film or commenting on it. As they say, Bollywood knows to fire it’s shot on proper targets.

Priyatama tells the story of Parsha (Siddharth Jadhav) who belongs to a community commonly known as ‘Potraj’ in Maharashtra. They have a identity as messengers of Goddess Lakshmi. They supposed to devote their entire life for this service. This community don’t get settle at any one place. What happens when Parsha falls in love with Gauri (Girija Joshi) who belongs to a rich family? Sounds similar to (Late) Rajiv Patil’s award winning Jogwa? Even the trailer of Priyatama gives you the same feeling.

Priyatama is all set to hit the screens on February 14th where the makers will try to en-cash Valentine Day (At least, This is what the film’s Facebook page claimed indirectly). We wish Satish and his team all the luck.