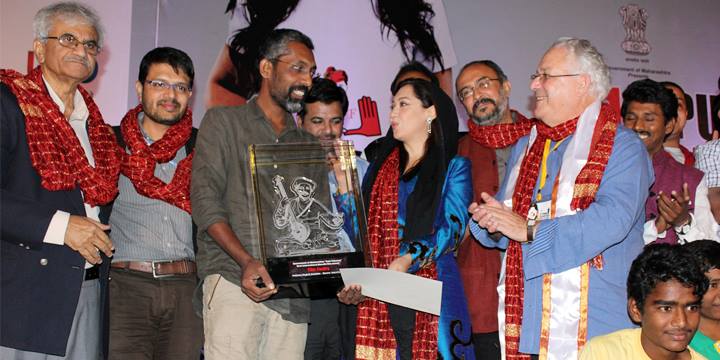 Essel Vision Productions’ presented film Fandry, undoubtedly one of the most talked about and highly appreciated films of recent times has risen more standards by winning the ‘BEST INTERNATIONAL MARATHI FILM—SANT TUKARAM AWARD’ at the 12th Pune International Film Festival. This award for Fandry was in recognition for the film as a whole as well as the direction by debutant director Nagraj Manjule. A cash prize of Rs. 5 lacs and a trophy were shared by the director as well as the producer Navalakha Arts and Holy Basil Productions.

Along with this top honor, Nagraj Manjule and Somnath Avaghade (Jabya) were also bestowed with ‘Best Director’ and the ‘BEST ACTOR’ award respectively. Apart from this Vikram Almani received Special Jury award for cinematography with Trophy and a cash prize of Rs 25,000 each for their magnificent performance. Fandry also received the BEST FILM in the audience choice category.

At receiving honor from international juries, Nagraj Manjule reacts, “I’m really very happy and delighted with such an overwhelming response from international critics and the audience gave a standing ovation to the film and many came to congratulate me after the screening.The jury for this selection consisted of renowned national critics as well as international juries from countries like United States, Spain, Germany, Iran, Mexico and Canada etc. So the honors meant recognition and applause at an international level. The whole team of Fandry is surely most excited about the new feathers in its cap.’’

This unique story is all set to hit the silver screens from 14th February 2014 across Maharashtra.