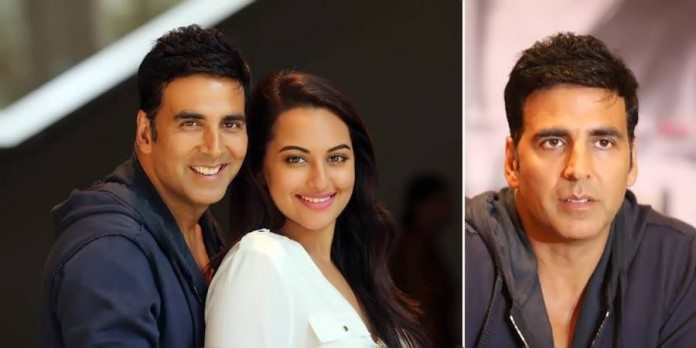 Bollywood Superstar Akshay Kumar expressed his desire to work in a Marathi movie at a press conference in Pune. “I have already produced a Marathi movie (72 Miles), so I am already a part of this Industry. I salute Marathi cinema. It is really commendable how versatile subjects are handled in Marathi industry. I would love to act in Marathi movie if a suitable role is offered to me.”

Akshay Kumar has come to pune for promoting his Holiday (releasing on 6th June) along with actress Sonakshi Sinha and director Murgadoss. The trio arrived for this press meet fashionably late by one and half an hour.

In his usual casual manner Akshay said he feels that Pune journalists always test his Marathi skills. “Marathi has made a movie like Balak Palak a movie about sex education, something we still cannoteven think of. I have seen Balak Palak and Yellow. It is really admirable for any Industry to produce movies on such diverse subjects. I will keep producing Marathi movies and will surely act in a Marathi film” Akshay commented.

Speaking about Holiday, he said that thisis a serious movie about soldiers and their patriotism. “I will not say that audience is used to watch me comedy movies only. “I have done movies like Special 26. Mugadoss has earlier delivered a block-buster like Gajhani and this film also promises same kind of action and entertainment.”

Holiday is a story about how brave Army Captain Virat Bakshi destroys plans of terrorist attack on Mumbai. Sonakshi Sinha will be playing a role of wrestler in this movie. “Audience have always seen me as a quiet housewife type roles, however, this a very challenging and interesting role for me,” said Sonakshi.