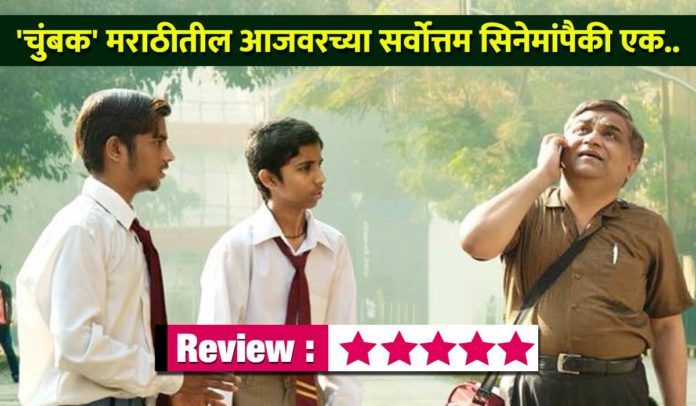 Backed by Akshay Kumar ‘Chumbak’ is a buffet of cinema or entertainment! There’s enough food for everyone here! It’s impossible to define it as one particular ‘cuisine’! Though the film has won at many prestigious film festivals all over the globe, ‘Chumbak’ isn’t a typical ‘festival’ affair! Neither is it typically commercial. I can confidently tell you this is a film for all kinds of audiences with all kinds of tastes & preferences in cinema!

Directed by Sandeep Modi & written by Saurabh Bhave, this film is a battle between the good & the evil within a person & not the usual good vs evil battle! The metaphor of ‘Chumbak’ or a ‘Magnet’ can be interpreted in two ways in the context of the film. One is that there are two opposite poles of a magnet. One can tilt towards either of them. The other is the direct context of Swanand Kirkire’s character ‘Prasanna’ who in a way is representing the positive side of the magnet that is naturally attracted towards the negative side of the magnet (the con kids Balu & Disco).

Though scientifically the positive side of a magnet cannot change the properties of the negative side even after being attached to it! But in real life & with real people it is possible, that’s what makes us humans & not objects! A positive within a person can have an influence on the other person’s negatives, not to forget the other person also has his own conscience that is again a magnet within with both positive & negative poles!

‘Chumbak’ is also groundbreaking in a very subtle way in another context. Marathi films are clearly bifurcated into urban films & rural films. There are very strong leanings of our films towards either of the two bifurcations & sometimes even if the film on it’s own has tried hard to avoid leaning towards any one of the two, the audiences instead have clearly sorted them out. The journey of Chumbak’s protagonist begins from Mumbai & then goes through the rural parts in the time frame of the narrative of the film & before this time frame his journey has been from rural to urban! Not that this must be a conscious decision from the makers of the film, but unconsciously they have diminished the geographical differences to much extent in the film! We don’t look at the humans of these regions differently like we do in other films!

The film is a visual delight & the cinematographer Rangarajan Ramabadran & the editor Chandrashekhar Prajapati deserve credit for it along with the director! The detailing in the craft of the film from production design to the use of background score & sound too enhances the experience of the film. Last but not the least the film involves mainly the three lead characters only & is standing on their capable shoulders throughout!

While the kids Sahil Jadhav (hailing from Pune, who has done a bit of theatre) & Sangram Desai (completely new to acting, comes from Kolhapur) haven’t missed a single beat in their performance it’s Swanand Kirkire who has given a spellbinding performance in Chumbak! A star is born! If compared with such roles seen in different films before, Swanand Kirkire’e performance is totally different from all of them & has been so organically developed & projected by the actor & the director too who has orchestrated the performance! Sandeep Modi is one bright director to watch out for! He has probably made a masterpiece straightaway in his debut, a very rare feat to achieve!

If you are watching only one Marathi film this year, it has to be ‘Chumbak’! Doesn’t matter what your genre preferences are this one is a must watch for everyone!