After taking the world by storm with their first Bollywood Film Production Oh My God (OMG), Akshay Kumar and Ashvini Yardi are on a journey of creating milestones in the entertainment industry with their latest venture, 72 MILES: EK PRAVAS

The film has been shortlisted to be screened at Europe’s No. 1 Festival for Indian Indie Cinema – The ‘London Indian Film Festival’ (LIFF). LIFF will be attracting international audiences for a screening of the film on 20th July in Central London, with support from partners including the BFI, Cineworld, Grange Hotels, ICA, BAFTA, Satyajit Ray Foundation and ZEE TV. Other regional film to be screened at the LIFF are Kannada, Gujarati, Bengali and Urdu all with English subtitles to connect to an international audience.

The film which is the duo’s debut into Regional Film production has been stirring waves with its conceptual excellence and moving screenplay. A hard-hitting, poignant tale of a young boy who makes his journey into self-actualization against the backdrop of a rustic India, 72 Miles Ek Pravas, explores a beautiful, coming of age journey for the 13 year old boy Ashok and the companionable relationships he makes through his journey. 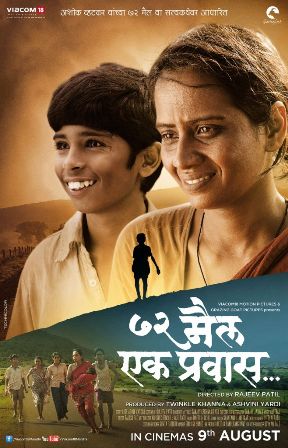 Akshay and Ashvini are confident that their film will touch the hearts of audiences and give them a visual introspect of Ashok Vatkar’s autobiography. Inspired from the novel with the same name, 72 Miles Ek Pravas explores the impact of a woman named Raddhakka, on protagonist Ashok..

Commenting on the film Ashvini Yardi said, “We are filled with immense pride and gratification at opportunity to be able to screen 72 Miles Ek Pravas at the London Indian Film Festival. The film is very dear to Grazing Goat Pictures and we have produced a beautiful content driven film. There are no big stars or songs & dances but the films driving factors are the heart wrenching screenplay and the glorious performances. The motive behind bringing this film to London is to make this film available to Global audiences and connect with the masses on an emotional level. We hope that the film is well received and we succeed in creating the impact that we set out to!”

The self made superstar Akshay Kumar said, “72 Miles marks our first regional film and we’re delighted to announce the release date. Marathi isn’t my first language but living in Mumbai I picked up the language very quickly and immersed myself in the culture. I’ve seen some really interesting Marathi projects and love the cinema. I am personally touched by the story of 72 Miles and I hope the audience likes it as much as we do.”