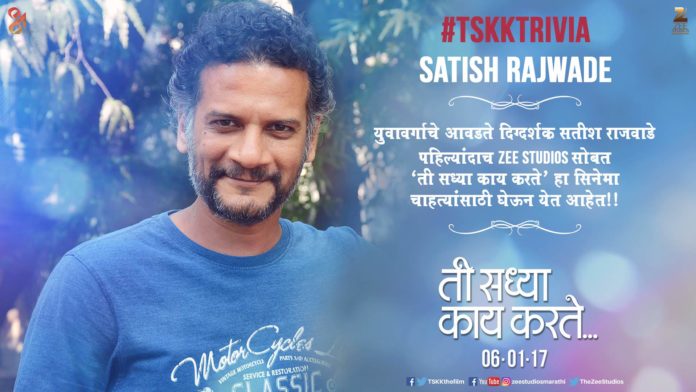 Satish Rajwade is one of the new breed of Marathi directors who is known for his hit films like ‘Mumbai Pune Mumbai-1 and 2’, etc and now his most eagerly awaited film ‘Ti Sadhya Kaay Karte’ is up for release and we spoke to him about this film and this is what he has to tell us.

How did you get the subject of ‘Ti Sadhya Kaay Karte’?
Some of it is based on my own experiences and some what I have observed from other people like my friends and other sources and this is how I wrote the story of the film and it is very real and without anything filmy.

What is the film all about?
It is about love that happens to us in all stages of life, be it in childhood or adolescence or adulthood but the fact is that we can’t leave our childhood love behind and we always remember it or cherish it and there is always a curiosity factor about our childhood love which always lingers on. . The film also depicts what really goes out at the end when the two lead actors separate the two and the way events transpires between the two.

You are introducing Laxmikant Berde’s son Akshay in the film?
Yes. But I have not cast him for he being just Laxmikant Berde’s son but also because after he gave an audition , I thought he fitted the bill for the role and he agreed to do my film and he has suited the role like a glove. Also Ankush Chodhari has been just right for the character in the film and also singing star Aarya Ambekar is also perfect for her character in the film. Tejashri Pradhan also plays an important role in the film.

Where have you shot the film?
The film has been shot entirely in Mumbai and Pune locales.

And the music?
It has a wonderful score by Nilesh Mohrir and Vishwajeet Joshi.