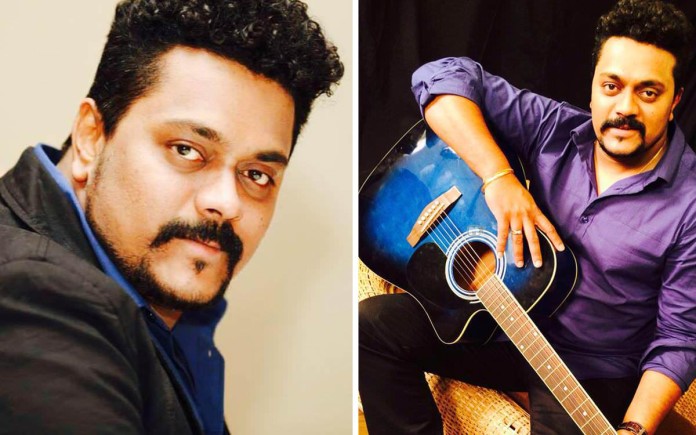 Amit Raj, a rocking name in Marathi music industry has delivered many hits in the past. His works in Classmates, Pyar Wali Love Story have been widely popular. Most anticipated film of the year Sanjay Jadhav directed Tu Hi Re features some of his songs. Marathistars.com spoke with this music director about Tu Hi Re and his musical journey.

Amit, Tu Hi Re songs are already chartbusters. How does it feel?

It always feels great to work with such a visionary director. Sanjaydada always try to make films which are larger than life and same reflects in his songs as well. He is clear about what he wants and that makes me easier to compose. Basically he is a good technician, but also a great human being. His understanding of music and human emotions is amazing.

Gulabachee Kali, and Tola Tola are becoming a trendsetter in Marathi industry..

Ans: Both these songs are a story in itself. When we were working on Gulabachi kali, it was decided that only Vaishali will sing it. However, Sanjaydada wanted do something different in terms of voices used in this song. He was also very much clear that this song will be picturized on the singers along with the lead star-cast. Rather than using another male voice, we thought that we will do something unusual. Urmila Dhangar has an excellent folk texture to her voice. Addition of her voice actually made this song unique. Vaishali’s soft soothing and Urmila’s pahadi texture has become a heady combination all together. To change the monotony of female voices we used my voice. However, the real winner of this song is Urmila and Vaishali. 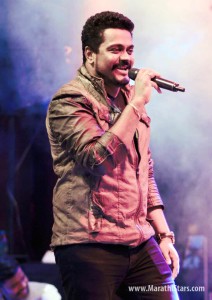 Tola Tola was composed for another film, but that film went on hold. There was another film which Sanjay Jadhav was producing, and we decided to use this song, again unfortunately this film also went on hold. Then Sanjaydada said he is making Tu Hi Re and wish to use this song in this film. What more can I ask for? We wanted to record this song in some another male singer’s voice. This singer was going on a world tour and would not be available for recording. Shooting dates were fixed so I recorded a cue-track in my voice for the shoot. However, everybody on the sets liked this version so Dada decided to use my version as final track. This is my first romantic song as a singer, which is really amazing. I am flattered by the reactions and comments I have been receiving from everyone.

How did your journey start as a music composer?

Ans: I started as an assistant to Monty Sharma. I worked under him for more than eight years; working with him during Sanjay Leela Bhansali’s Devdas, Black etc. This was a great learning experience. I had a chance to work with SLB, his larger than life visions, and his hold on technique and understanding of music is amazing. After assisting Monty for such a long time, I decided that I will start my individual work. In 2011, I started with background scores and title tracks for TV serials. I did dome five serials with more than 200 episodes. Work was not very creative, but I needed money badly in those times. During this time I met Rajeev Patil. After listening to my work, he offered me 72 Mail: ek pravas. The DOP for this film was Sanjay Jadhav. He called me one very early morning. He wanted a sad song in his directed film. I composed Deva tujhya gabharyala and the song became chartbuster. Sanjay Jadhav introduced me to the audience. You need a click, that click for me was this song from Duniyadari. Just like we have SLB in Hindi, we have Sanjay Jadhav in Marathi who dreams of making extravagant films. For me, it is a lifetime association with Sanjaydada.

Nowadays songs are getting popular in a very short time. Do you think this popularity is short-lived?

I have a slightly different view. I think once the song is popular it remains popular all time. Once Pyarelal (from Laxmikant Pyarelal) told me that the song should be such simple that even a layman like Rickshawala should be able to sing it..

Another very interesting aspect is earlier the channels for music were limited. People use to struggle for years to reach the audience. You can still hear stories how newcomers used to beg for just one chance. But the emergence of social media has provided a very good platform for these new and emerging talents. Platforms like Facebook, Youtube, Soundcloud make it very easy to reach the listeners. The important thing about social media is that whenever people listen something good they immediately tell others about it. So the wave continues and artiste reaches to millions of people easily. There are amazingly talented artistes, but they do not have any exposure. Such people have started making their career out of these social platforms. I have used such singers in my songs. Harsh who sang with me in classmates – Yaariyaan and Sawar re, I found him on youtube. He has done a cover version of Laal Ishq and released it on youtube. I just fell in love with his voice, I contacted him and he has been singing for me.

Talent Hunt shows and singing Reality shows have booming in the past decade. Do they help you as a music director? 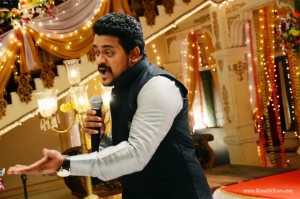 It helps me immensely. I like to do different experiments in terms of my sound. I like use different new voices and textures. Pyarwali love story had a Qawwali. I used Divya Kumar and Ronkini. Divya was not that much famous but still I used him; Ronkini performs with Rahman for his stage shows. She has a fantastic voice quality. I also introduced Kirti Killedar.

Today’s generation is very impatient and wants quick results. These people will listen to the sound which appeals to them, and which is at par with Hindi or western style. Why they should listen to Marathi when they can hear world music easily and they can relate with this sound. We have to keep ourselves upgraded, we have to see what is happening in Hindi and other regional industry. Youth will never listen to something which is already old.

What will be your advice to the new aspiring singers?

I will say just keep doing your riyaz. There is no music without riyaz. You voice will shine only when you have polished it with riyaz. Keep listening to every genre of music. Now competition is very tough. If you look from a music directors’ perspective, I am renting the studio, I m renting the technicians, so for me recording cannot be delayed. Singer has to have that grasping power of understand the music and sing it accordingly. It is not only about understanding nuisances of music. You have to be sharp in every aspect. Also, you need to respect your singing; this is your work, not just a step to achieve fame and money.

Let me narrate you an incident. We recently recorded a song with Anand Shinde and Adarsh Shinde. For the first time, this father-son duo will be singing together. Before recording Anand Shinde removed his footwear, touched the entrance of the studio and then entered. This was such a humbling experience for all of us. Anand Shinde is a legendary singer and he has recorded so many songs, yet he has this kind of respect for the music. It took him less than half an hour to record the song with various takes. He still does riyaz everyday and he respects his profession.

Tell us about your forthcoming Releases.

My next release will be Bandh Nylonche starring Subodh Bhave, Mahesh Manjrekar and Shruti Marathe. This film is being directed by Jatin Wagle who has earlier directed Chakwa. He is making a film after so many years. This has a very different concept and for the first time audience will see a completely different Mahesh Manjrekar. I have done all the songs for this film.

Does it make a difference when you are working on an entire album or doing one or two songs in the album? 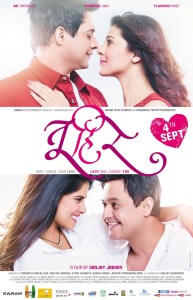 Ans: The difference is in the sound. Every music director has his own flavor altogether. If you listen to various music directors, you will understand these differences. For example, Pankaj Padghan uses trumpet many times and I don’t like to use trumpet at all. There is nothing good or bad in this manner, it just changes the continuity of the sound. Sometimes, that is also very exciting. When two or more people work together experimentation happens easily.

Coming back to Tu Hi Re, which song you liked most?

I liked Sundara composed by Shashank Powar. Another song which is yet to be released is my personal favourite. It is a sad song sung by Adarsh Shinde. For this song, Sanjaydada told me that I am not composed before shooting. He wanted me to see the climax of the film during editing. While watching that footage, the tune came to my mind. Sanjaydada heard it, and passed it immediately. This song is very much close to my heart.

Amit, Thanks a lot for speaking with us. We wish you best luck for all your future projects.