Apparently product placements are the new trend in Marathi films. After watching numerous Hindi films advertising for various products, Marathi industry follows the same footprint. Tu Hi Re’s song Sundara is not just a song; it is an advertisement song for a certain talcum powder.

So, when the song starts this village belle is bathing in some water-tank. Yes, That’s Saie Tamhankar! She comes out of water and uses talcum powder. Now to be in sync with this product, the entire make-up and costumes are done in baby pink- which looks very creepy on Saie’s skin tone. Lipstick, bindi, blusher, nailpolish, saree- everything is in that pink shade. 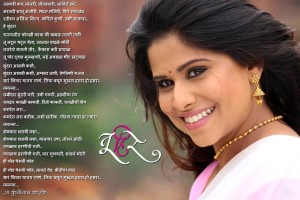 The song seems to be introductory song of Saie’s character and resembles heavily with “Hum Dil De Chuke Sanam’s” Manmohini- which was Aishwarya’s intro song in the film. However, Sundara lacks the grace and poise of Aishwarya and skillful choreography of Sanjay Leela Bhansali. This results in a pinky pinky Saie doing some random dance steps and playing with some kids at some desolate temple.

The song has vocals of Adarsh Shinde, and he has done a fantastic job, However, watching Saie in that pink half saree (where exactly Marathi girls wear these Sarees?) is just not very pleasant.

The film is one of the most anticipated movies in 2015, but we do hope that film lives to its expectations.