Faisal Khan, a name known on TV for his role in Maharana Pratap and dance reality shows will be making his debut in Marathi films along with Kajal Sharma in Prem Kahani. As the title suggests, this is a romantic saga about two lovers from Maharashtra and Rajasthan. The poster and first look of this film was recently unveiled in an event. The film is directed by Satish Randive.

Story is written by Satish Randive, dialogues are by Raj Kazi and Abhijeet Pendharkar. The lyrics are by Yogesh, Rajesh Bamgude, Praveen Kuwar and music is by Praveen Kuwar. The songs are sung by Bela Shende, Shalmali Kholgade, Bharati Madhvi, Pamela Jain and Javed Ali. Songs are chorographed by Ashish Patil, Onkar Shinde, Maya Jadhav and Kartik Paul. 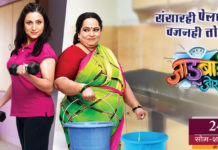