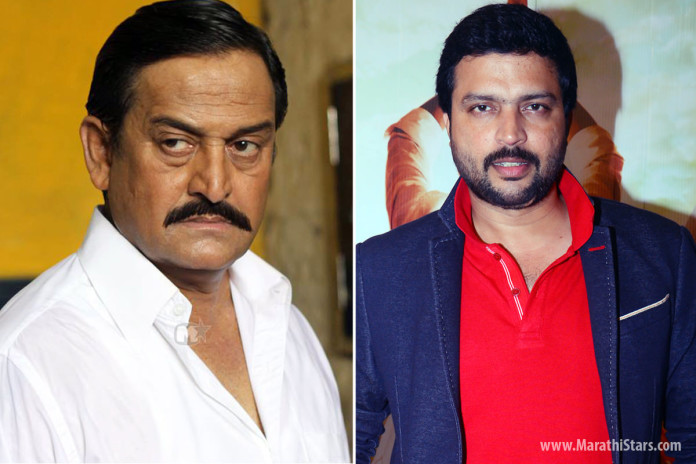 Ankush Chaudhari, a dashing handsome actor is on a roll. After his fantastic portrayal as a middleclass husband in “Double Seat”, his next release “Dagadi Chaal” is being praised by the audience and critics.

Ankush plays role of a common youth turned towards violence. The film has already been declared as a superhit and audience is adoring Ankush. His industry collegues are also congratulating him on his success through social media. One particular Facebook Status which caught our attention was by director Mahesh Manjrekar.

Viju Mane, mostly known for his films like- Khel Mandla and Gojiri has written a special Facebook Status on Ankush Chaudhari has shared this status on his Facebook wall.
It is worth noting that the play mentioned in Manjrekar’s status is Devendra Pem’s All The Best starring Bharat Jadhav, Sanjay Narvekar and Ankush Chaudhari where Bharat played deaf guy and Sanjay played a dumb guy. The trio rose to huge success after this play and Bharat became an instant hit in Comedy roles for films. However, Ankush did not enter into the aggressive race of stardom and yet, even after more than twenty years, he keeps proving his metal on the box office.

Ankush Chaudhari … Proud of you !!!!!!
1993….I still remember a young, skinny, good looking boy in an one act play which brought the house down. That one act play later became a stupendous hit professionally. The deaf & dumb guy became a rage overnight but all would ask-“Who plays the blind guy?” The blind guy always took a back seat, a smile on his lips but patience visible in his fierce determined eyes. Then films happened. Here too everyone surged past him to be big stars but the blind guy remained on the fringes-an also ran- The race of stardom was aggressive & cut throat, but the blind guy happily remained in the shadows of his more successful mates. He waited, conscious of the fact that he was slated for a bigger triumph. And when time came, like a Phoenix he rose, leaving behind everyone,one after another &reaching a position he actually deserved. The tortoise wins once again. Proud of you ANKUSH.
– Mahesh Manjrekar

Interestingly, Manjrekar has called Ankush a phoenix and a tortoise in the race of stardom. We all know that Ankush does very few films, but his every role is superbly portrayed and showcases his talent.

We wish all the very best to Ankush for his future projects.