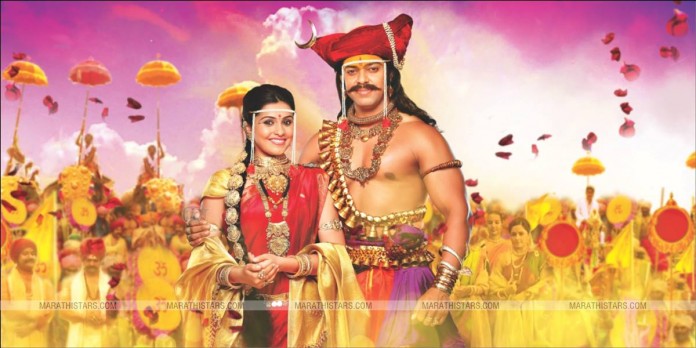 Zee Marathi’s popular serial “Jai Malhar” will be celebrating marriage ceremony of Khanderai and Mhalsadevi in a special two-hour episode on Sunday, 17 August at 7 pm. The marriage ceremony has been shot extravagantly and shows various traditions and customs of bygone era.

Khanderai is one of the most popular deities in Marathi culture. It is believed that, Khanderai and Mhalsa were married on the auspicious day of the full moon in the Paush month of Marathi calender. Khanderai’s ardent devotee had expressed her wish that he should get married in her village. The entire village is now ready for this ceremony. All heavenly gods and goddesses will be coming for this ceremony. However, Khanderai has a very problem before this marriage. He has already promised to meet to his another devotee Banai on the same day. There is already a prophecy if Khanderai goes alone somewhere on his marriage day, a catastrophe will occur. It will be interesting to see how Khanderai will clear all this confusion and fulfil his promise for his devotee and fulfil his role as a groom.

Marriage Ceremony of Khanderai-Mhalasa
1 of 4

The serial is produced by Mahesh Kothare. The role of Khanderai has been played by Devdutt Nage, while Mhalasa and Banai are played by Surabhi Hande and Isha Keskar respectively.