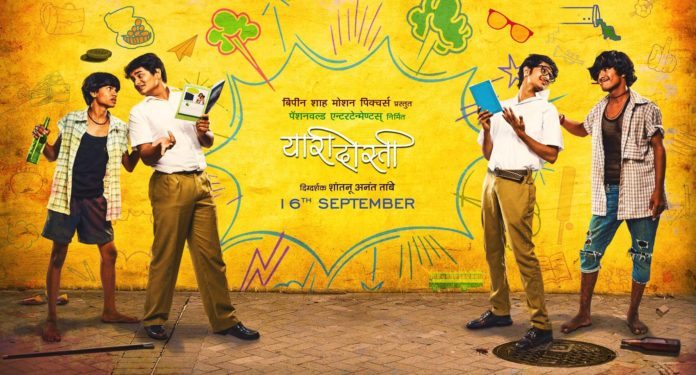 In 2012 came Sujay Dahake’s Shala, It initiated a wave in Marathi Cinema. That of teenage films in which either they were in love or on the verge of turning adults. We saw few decent films, some really good but mostly poor films. Poor at almost everything from scripting to executing though most of them had decent acting performances. Yaari Dosti is a blunder in that department as well. Most of the young cast seems to have the background of Inter Collegiate Theatre.

Inter College One Act Play competitions usually train many (almost all) of the future actors of our fraternity. These kids too must have gone through that process. However this transition needs vision & execution. Ravi Jadhav’s Balak Palak had the same cast that performed the one act play (on which the film was based) in such competitions.

Yaari Dosti is basically a rags to riches story of two kids who live in the slums of Mumbai. Their names are Gatar (Hansraj Jagtap) & Nala (Akash Naghmode). Somehow (let’s not get into that) they end up in a boarding school at Chiplun (Konkan). Nala & Gatar are interpretations of the great Munna Bhai in some way. There is nothing wrong with their characters though. It’s just that the kind of craftsmanship that is needed to utilize such highly common characters is missing completely from the screenplay. So Nala & Gatar befriend two geeks in the boarding school. Prasad (Aashish Gade) & Rahul (Sumit Bhokse) are probably the worst representations of studios kids in our country. Prasad’s love interest is the girl who comes second in the class, Rani (of course Prasad comes first). Rani played by Mitali Mayekar has hardly any screen time. But in those few scenes Mitali manages to disrupt the ongoing verge of terrible acting in the film.

There is a whole lot of stock characters played terribly again. The king of it is the principal of the boarding school who speaks in an annoying nasal tone. There is a stock sexy teacher who wears sensuous sarees. Then there is Arjun Sir (sports teacher) who wants to live his unfulfilled dream of becoming a cricketer through one of the protagonist.

At one point Yaari Dosti manages to make a point (though unintentionally) which a few years ago Mahesh Manjrekar tried to make (Shikshanachya Aaycha Gho) that school education is absolute garbage. Yes because both Nala & Gatar are required to pass their 5th std with certain marks to be able to appear for SSC. As if 6th to 9th are completely irrelevant.

The cherry on top is the consistently irritating background score. The film feels to be never ending in the second half & makes you pray that the conflicts that are created in the film get resolved as quickly as possible. But the ultimate award of best (or maybe worst) performance among various departments in this film should go to the dialogue writer. They unintentionally crack you up & keep you awake throughout the film. The camera stays still at many instances & we feel we would have rather watched a video recording of any decent one act play. The film has some worst slow motion sequences too & even in simple shots the camera keeps falling (literally).

We can’t remember the title song except the fact that it was annoying & the one we remember is a Ganpati song with terrible choreography shown at the end of the film.

The makers of this film might be really bothered about life in the slums. They might be feeling this film propagates the message that we should always be considerate to them as they too can be equally talented & have the potential to make it big. Sadly all those noble intentions do not transcend on screen & we are treated by a mess that hardly tells anything or strikes any of our emotional chords.

This festive season stay safe & stay home unless of course you are a part of this film’s team.