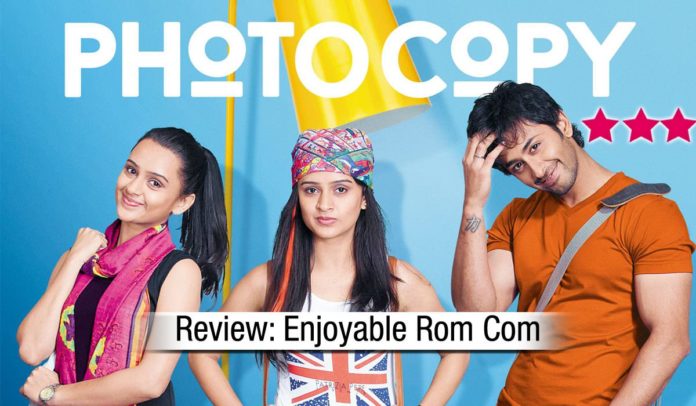 Photocopy starts with a voice over narration by senior actress Vandana Gupte, where she stresses that the film focuses exclusively on this specific Mahabharat, out of the entire universe. So the story is set in the famous Italian styled township near Pune. What the film does here is that it establishes the world in which it’s set & in a way restricted. People here are mostly rich or higher upper class. So a triangular rom com is pretty convenient here.

Mala & Madhu (Parna Pethe) are twins & exact carbon copies of each other. As expectedly they are poles apart from the inside. So predictably this should lead to the famous comedy of errors which we have seen endless times. Refreshingly Photocopy avoids it. Instead it goes through a different route, the love triangle expressway. Again here there are ‘n’ number of films that we are reminded of. But two important reasons help us to still enjoy this ride.

The most important reason is the Photocopy herself. Parna is outstanding to say the least. It’s a treat to watch her explore the two poles apart characters, though the plot holes keeps hampering her performance. The first half establishes the twins well, but as the film progresses their personalities seems to be manipulated for convenience. In the second half two major logical errors (they are quite evident & self-explanatory) almost ruin the emotional attachment we managed to create with the principle characters. The second reason lies with a supporting character & his contribution towards taking the story forward. Devashish played by Shala fame Anshuman Joshi. Devashish is a unique take on that one guy who’s always there for his girl. By eliminating a romantic angle here, Devashish becomes even more relevant.

Photocopy has pleasing visuals, enjoyable song sequences & a lavish feel that we are used to see in decent rom coms. Another positive is that it manages to explore campus life to an acceptable extent. Earlier in the year we saw Phuntroo which was brilliant in establishing the campus life but lost it entirely when in the second half the plot turned out to be a debacle. Even though Photocopy doesn’t really qualifies to be a “campus life” film, it’s campus interpretations interest us.

The use of Lord Ganesha (the husband of Riddhi-Siddhi) as a metaphor is smartly executed but left in between where there was much scope to explore. Chetan Chitnis, the lead hero stays merely an object both in characterization as well as in the plot. One of the major logical errors involves the convenient ignorance the film shows to him. Hence it becomes difficult on our part & unfair on his part to judge his performance in this film. Chetan will soon be seen in Sachin Kundalkar’s Vajandar, hence we prefer to judge him in that film.

Vandana Gupte’s character (of a modern day grandma) deserved much better treatment in the key moments of the film, which definitely would have helped the cause. Photocopy is directed by actor turned director Vijay Maurya. Vijay has Bollywood films like Anurag Kashyap’s Paanch, Imtiaz Ali’s Socha Na Tha &Nishikant Kamat’s Mumbai Meri Jaan to his credit. He has done a few Marathi films too. As a writer two genuine beauties; Chillar Party & Striker are also to his credit. The reason I mention all this, is the fact that we expected a special Vijay Maurya touch to this film & unfortunately we couldn’t find it. Instead we see the special touch of singer turned producer Neha Rajpal. Don’t ask us how, it’s just that the film represents her personality aptly.

Watch out for the hilarious cameo by our favorite character star Jaywant Wadkar!

Photocopy is worth a watch for Perna Pethe alone. The film has a soul that will connect with today’s youth in particular. The plot holes are present throughout but can be ignored if you are not looking for logic every single time. For Rom Com fans Photocopy is a sure shot treat not to be missed!