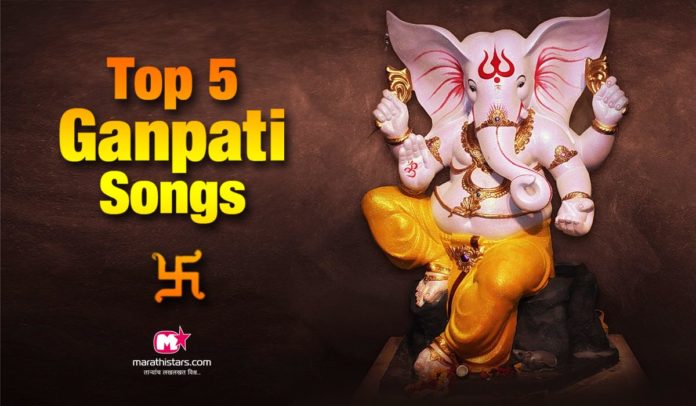 Ganapati Bappa Morya! Yes, Ganesh Chaturthi is here, and the joyous cries of Ganesh bhakts are going to ring through the air. Maharashtra’s favourite God is going to be the center of attention of the state for a couple of weeks now. The whole atmosphere is going to drown in the Ganpati fever!

Now, no Sarvajanik Ganapati is complete with a loudspeaker blaring music. They would do better if they restrict the music coming out of the speakers to devotional songs. Ganapati has also been a God that has had a song dedicated to it in many of our films; these days one Ganapati song is mandatorily added to nearly every Marathi film. So, just to make it easier for the Sarvajanik Ganesh Mandals, we have come up with a list of Ganpati songs which we consider to be the best of the lot. We have restricted ourselves to Hindi and Marathi films of the recent past.

So here we go,
Morya Re- Don ( 2006 )
Composed by Shankar-Ehsaan-Loy and sung by Shankar Mahadevan himself, the song is still a popular Hindi Ganpati song. What set this song apart is that the composition has a vintage Bollywood feel to it and isn’t exactly a devotional song/aarati. Javed Akhtar has also worked magic with the lyrics. The song is an adieu to the God during the visarjan ceremony.

Hey Lambodar – Morya ( 2011 )
This song from Avadhoot Gupte’s Morya has to be one of the most innovative experiments in composing a Ganapati song. It has been composed in the style of a Qawwali and the producers even got the recently deceased legendary singer Amjad Sabri to sing for them.

Deva Shree Ganesha – Agneepath ( 2012 )
A devotional song alright, but packed with such fervor that it never fails to give you goosebumps, courtesy the arrangement. Ajay-Atul shot to fame in Bollywood with this album which had other quite a few lovely songs. If you ever need to get your adrenalin pumping, this song should work most times! It has also been sung by Ajay with great energy.

Sur Niragas Ho – Katyar Kaljat Ghusli (2014)
The musical, which was a big Marathi hit last year, was full of delectable songs. Shankar-Ehsaan-Loy had reworked a few of the original classics from the play on which the film is based, and had also composed a few original. ‘Sur Niragas Ho’ is one of them. Sung by Shankar Mahadeven in his typical elegance, it indeed sounds like an innocent prayer to the Elephant God.

Shree Ganeshaya Dheemahi
Originally from Ajay Atul’s album Vishwa Vinayak, this divine composition was used again in the Mahesh Manjrekar film Viruddh starring Amitabh Bachchan in the lead role. I wonder there would be anybody else more competent to sing this song other than Shankar Mahadevan. The highly nuanced and graceful composition and voice put you into a trance of sorts.