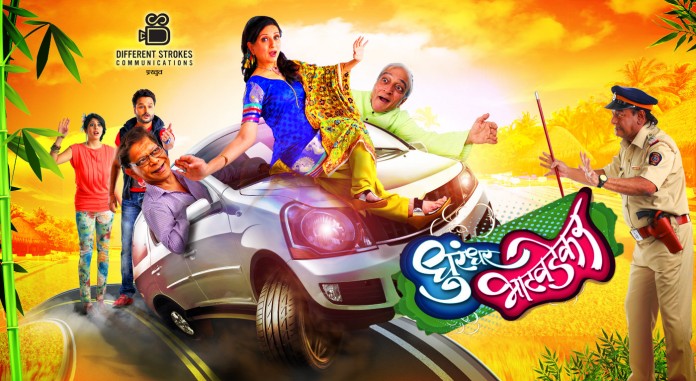 Dhurandhar Bhatawdekar leaves you speechless. A film leaves you in such a state for two possible reasons – either you are spellbound by its goodness or shaken by its manner of making a mockery of every aspect of filmmaking. Unfortunately, the second reason comes true for the directorial debut of Kshitij Zarapkar.

Let’s try to get some hang of the basic plot, although it is difficult. A housing colony in Mumbai is known for its unity and kindness. But it also follows rules and regulations as laid by its head Mrs Damle (Kishori Shahane). According to one of the rules, all single (alone) people will have to share their room with someone even if other rooms are empty because, they feel, we all need someone in life. One of the residents is Appa Bhatawdekar (Mohan Agashe).

With nobody available to share his room, Bhatawdekar enjoys staying all alone until Avinash Dhurandhar (Mohan Joshi), a Marathi theatre and film actor, arrives. Bhatawdekar and Dhurandhar don’t get along well right from their first meeting with the latter’s constant bullying of the former making it worse. Soon, a competition emerges between the two in wooing Mrs Damle. Who will win?

To be fair, the film starts on a decent note due to some amount of humor arising out of the enmity between Dhurandhar and Bhatawdekar. But the proceedings soon go wayward and how! What follows is a display of complete immaturity and silliness in terms of the screenplay, dialogues, direction as well as intention.

But the biggest downfall is the lack of clear story. It starts as an animosity between both characters, going onto a love triangle and ending up as a father-son relationship. But this is not all as there are many sub-plots and too many characters (read: caricatures) having no purpose whatsoever!

It is not surprising that you are left with constant questions lurking in your head. Which colony (which is clearly a hotel) would disallow people to stay alone in a room if they are willing to pay for it?If it is a housing colony, why do we have someone as a head who scolds people if they don’t follow the rules? Why will a sabhya person like Bhatawdekar woo a woman just out of attraction? Well, the list is long!

There is nothing much to talk about even in the technicalities. The camerawork is average but the background score tries too hard to make you laugh. There is also an unnecessary repetition of the same tune. The editing is abrupt.

Needless to say, the performances are negatively affected by the content. Mohan Agashe is the best of the lot but even he overdoes a few times. Mohan Joshi shows his talent here and there. Kishori Shahane and Jayant Savarkar are average. Although her character doesn’t hold much importance, Tanvi Hegde shows she is surely talented.

Dhurandhar Bhatawdekar is a miserable attempt at filmmaking.