Dhag tells the story of a poor family forced to take up their ancestral and caste-based profession of performing last rites. Hence, their livelihood depends on someone’s death. Despite his hatred towards the profession, Shripati (Upendra Limaye) has been forced to practice it all his life to fill his and his family’s stomachs.

But he doesn’t want his son Krishna (Hansraj Jagtap) to continue the disturbing legacy. Even Krishna is firm in saying a big no to the family occupation. Shripati’s wife (Usha Jadhav) is torn between her support for Krishna’s ambitions and their need to earn a livelihood. But Shripati’s mother strictly believes they shouldn’t deviate from their ancestral profession. Where will the path lead Krishna?

Death is considered extremely unpleasant in every society, quite naturally. So how would you feel if a family eagerly awaits someone’s death? Director Shivaji Lotan Patil has portrayed this bold feature in Dhag. But instead of providing a tragic and disturbing account of a family forced into an unpleasant profession, he presents a kind of cinema that is daring and honest in every aspect thereby making it a must watch for the lovers of sensible subjects. 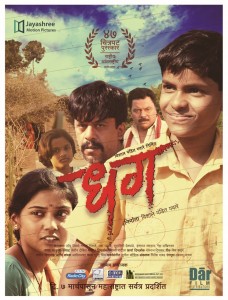 It would have been a big challenge for writers and director to get the audience introduced to a lifestyle they would have hardly imagined. They fulfill the challenge and how! The viewer is made a part of the concerned family through a mixture of some high quality writing and presentation along with some excellent performances. The scenes where dark and shocking humor is born out due to the family’s profession deserve special mention.

Naturally, such a tale has its share of depressing moments but they don’t turn you off or withdraw the interest simply because you have gained sympathy for its characters right from the start. But Dhag becomes truly a winner only due to an interesting turn and, later on, its consequences, which lead to an appealing and moving climax. The only negative aspect one can find is that the subject is not for the entertainment-hungry audience.

The film can also boast of its technical brilliance. Nagraj M. Diwakar has shown his class while capturing the film. The background score succeeds in creating the desired effect, although it becomes too loud at times. Aasi Ramchandra’s music goes well with the theme.

The performances play a large role in making the film what it is. Usha Jadhav is simply outstanding. The way she gets into the skin of a difficult character with such perfection so early in her career is simply applaud-worthy. But despite such a powerful act, child actor Hansraj Jagtap manages to super-impress. He deserves all the accolades for pulling this act so perfectly.

As expected from a seasoned artist like Upendra Limaye, he gives another mature act. Nagesh Bhosale too is at his best in an unusual role. Suhani Deshpande, Neha Dakhinkar and the rest of the supporting actors play their parts well.

Dhag is a daring effort that deserves a watch. The film relies on word of mouth to have an impact at the box office.