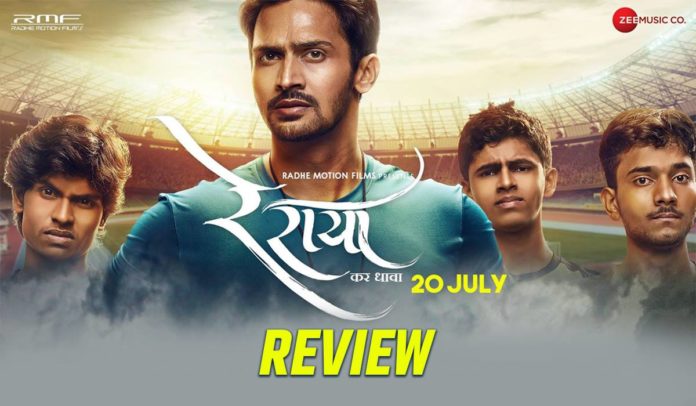 Re Raya is a film that lacks any serious inclination towards getting into the soul of the subject. It uses a usual sports drama template & adds anti-system rants to make it seem important. The film fails to make any connect with the audiences & struggles at basic technical aspects of cinema too.

The film starts off with Aadesh’s childhood (Bhushan Pradhan) & how he struggled a bit & made a mark as an athletic. This whole childhood sequence has very little to do with the actual film. The actual starting point of the film is when Aadesh doesn’t win the prestigious ‘Shiv Chhatrapati Puraskar’ (an actual award given to sportspersons & athletes of Maharashtra). The obsession of Indian athletes with such government awards is openly known, however never does ‘Re Raya’ think of it that it’s principally wrong for athletes to be so obsessed with a mere award! It never even tries to explain the importance of this award to us! However it uses the ‘award’ as the most important plot device! Later when Aadesh trains young kids for different athletic games he even says that he wants them to win the award which he couldn’t win!

These 3 young kids belong to the lowest strata of Aadesh’s village. None of them have any inclination towards sports. However they are good at certain talents that are tailor made for certain athletic events. This idea was certainly interesting but sadly the film never really uses it to it’s benefit. It fails at the basic stage of execution. Throughout the film suffers from abrupt & bad cinematography & editing. Another basic aspect at which the film fails is in creating characters. Aadesh’s friend (Nayan Jadhav), love interest (Sanskruti Balgude) have absolutely nothing to do in the film other than just being there for Aadesh, yet they have fair amount of screen time! What they do for a living? Even that is never known!

The only little positive about ‘Re Raya’ is that it manages to show High Jump, Archery to decently acceptable extent. The kid who plays the high jump athlete is probably a high jump athlete himself. However the ‘archery’ part also seems silly when it tries to create drama out of the competition. And the third sport, running is ruined throughout the film by jerky slow motion. Not even once did I see a running event in it’s normal speed! What’s with this obsession?

Talking about the performances, Bhushan Pradhan has again sank to the bottom where he previously was a couple of years ago, some of his recent performances (especially ‘Amhi Doghi’) under capable directors have been good enough but now he’s unbearable in every dramatic dialogue that he delivers. Among the three kids Hansraj Jagtap is the only ‘actor’ & he does decent work. Abhijeet Chavan gets a few decent scenes where we he uses his usual presence! Sanskruti Balgude’s performance stays irrelevant to the film just like her character’s existence. It’s sad that even after being directed by a talented actor like Milind Shinde, the film doesn’t even manage to work on a performance level of it’s ensemble cast.

This film made me think, the convenient use of post film text slide to wrap up the narrative should be officially banned from our films! I mean how simple it is to just say this, this & that happened. Anyways even without the slide ‘Re Raya’ had no chance of becoming a lesser bad film!

Sports film is an extremely connectable film genre. And Marathi audiences can easily associate with such stories, provided they are well made films with a decent story to tell. 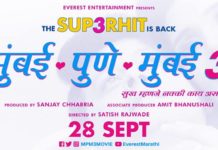