In Kulpe village, youngsters Raghu (Amey Wagh), Mukund (Ketan Pawar) and Bala (Siddharth Menon) are the best of friends. Unfortunately, they are not able to make a name for themselves, despite each one possessing some skill. To make use of their various talents, they decide to make a movie.

At the same time, Aids awareness campaign is on full swing in their village. Hence, they choose Aids awareness as the topic of their film. As they lack a proper camera and shooting equipment, they include marriage video shooter Janardhan aka Janya (Atul Kulkarni) in their team. What starts off as a fun activity ends up being the most soul-stirring journey of their lives.

The year started with Ravi Jadhav presenting a serious social message in a lighthearted manner in BP (Balak Palak). Now, Satish Rajwade does the same in Popat. Although the topic explored in Popat is hugely different from the one explored in BP, the end result of both the films is the same. After Premachi Goshta, Rajwade has once again churned out a delightful saga, which also has a repeat value.

Like various rural flicks, the aim of the writer here is to make sure the audience connects with the characters, their missions and the location. This means that the film doesn’t follow a conventional storytelling method. But this doesn’t affect the audience in any manner whatsoever. In fact, it works very well as the writer succeeds in the aforementioned aim. The ever-present lighthearted and hilarious moments keep the entertainment quotient high. 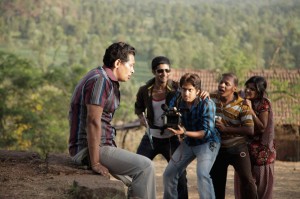 But the bigger challenge for the creative think tank was to present an unusual yet important social issue. The creatively witty and yet powerful manner in which they succeed in their task make sure they deserve nothing short of an applause. The reason for this is that it is no mean task to enlighten, delight and entertain simultaneously. The climax deserves a special mention for it leaves you overwhelmed.

The only negative aspect that appears is the overall length of 154 minutes, which could have been shortened, especially in the first half. But this won’t trouble you much as the film never treads on a slow path.

The locations look enticing due to Bhaskar Samla’s cinematography. Music doesn’t have an important part to play but the tracks by Avinash Vishwajeet suit the needs. Thankfully, songs are used only when required. The background score too is impressive.

Atul Kulkarni shows his versatility and talent in his portrayal of Janya. His sudden switch from underplaying the character to acting loud is the best part of his brilliant act. Amey Wagh, Ketan Pawar and Siddharth Menon too play their parts exceedingly well. They are impressive in both humorous and serious moments. The unusual chemistry between the four is always visible. Anita Date, Neha Shitole and Megha Ghadge shine in supporting acts.

Popat is yet another winner from Rajwade. The content has the potential of doing well at the box office. This parrot deserves to fly high!