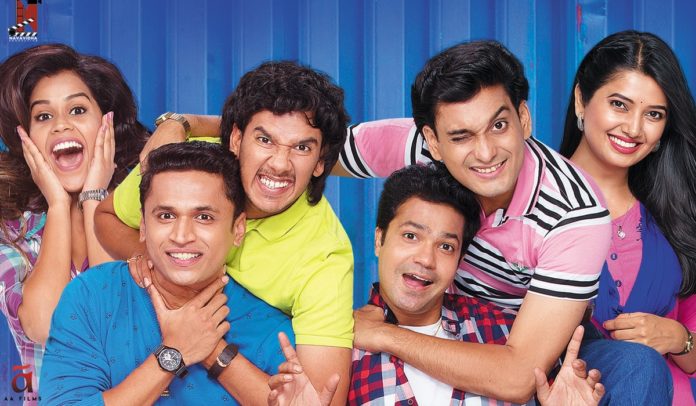 The overall takeaway from Sachin Darekar directorial ‘Party’ is pleasant in a way that you feel after a long time Marathi cinema has somehow come closer to the aura of ‘Duniyadari’, though a heavily flawed film ‘Duniyadari’ had created an aura around it & a group of dedicated fans. ‘Party’ too has the potential to become a cult among young film audiences who have loved recent youth centric entertainers too.

But when looked from an analytical point of view, Party has quite a few major problems. The first & foremost is the conflict in the second half. Somehow it works as a personal tragedy of a character but it doesn’t serve the purpose of the larger point the film wanted to make. This association of a personal tragedy to the larger point of the film worked better in ‘Duniyadari’, here it is weaker. The humor in the first half is too forceful at times, unnecessarily using many stereotypical characters like a ‘bhabhi’ & a clown like local goon-politician. In fact, the whole deliberate effort by the film to become funny affects the film adversely. Had it not been bothered to make people laugh, it would have turned a better film.

Out of the ensemble cast, Suvrat Joshi is surprisingly both the strongest & the weakest suit of the film! The story has two timelines, the present & the flashback. Suvrat Joshi is the strongest in the flashback but appears just unsuitable in the ‘devdas-mode’ of the present. There’s an underlying character development that the film doesn’t justify (well it doesn’t need to as 18 years have passed by in the lives of those characters). But the idea of an unserious guy turning responsible & the smarter guy losing everything has an inherent power in it. The film could have explored it better, but it stays faintly in the background.

One of the friends, played by debutant Stavan Shinde is shown as a Cricketer who plays for India (in the present), but not even once do we see any crowd wanting a selfie or an autograph from him! Secondly, the film keeps stressing that friends need to look after each other even when one of our friends is drowning himself wasting his life. The other friends seem to regret that didn’t look after him, but at the same time in a major montage sequence, we can clearly notice that those friends have looked after him many a time in different scenarios! By the end ‘Party’ wishes to become a thought-provoking tragedy, but it hardly scratches the surface.

The actors have done their parts well, but most of them are few notes loud especially in supposedly humorous scenes. For example when Chakrya (Akshay Tanksale) & Manya’s (Rohit Haldikar) father & mother (respectively) hit them a couple of times. The backdrop of a chawl seems realistic but the enactment of many such moments is loud & plastic. None of the performances really make a long-lasting impact on us. The music is good though, but again not quite that great as say ‘Duniyadari’.

Had ‘Party’ been written & executed to express than to forcefully impress, it had the potential to become a better film. A film that could deal with the growing away of friends in a more specific way & how time changes people.

Having said all that, ‘Party’ is a film that can still entertain most of the audiences who don’t mind a certain tone-deaf humor & the whole idea of friends being there for each other. And it does succeed in creating that bond among the characters.