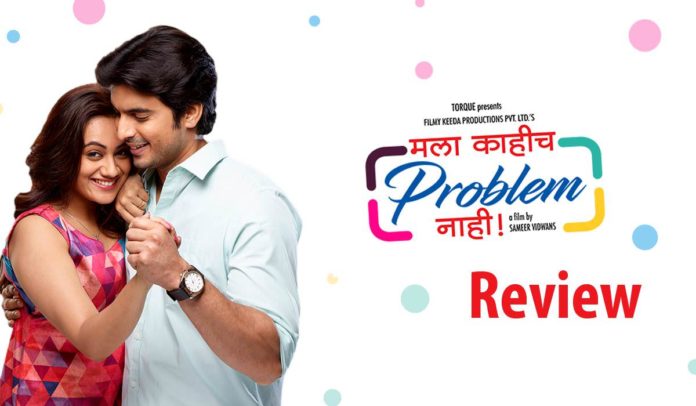 ‘Mala Kahich Problem Nahi’ is directed by Sameer Vidwans who previously gave us films like ‘Time Please’, ‘Double Seat’ & ‘YZ’. This is clearly Vidwans’ weakest film. It was also the first time Vidwans was working with a different writer (Kaustubh Savarkar). His partnership with Kshitij Patwardhan gave a fresh perspective to Marathi cinema, their best being ‘Double Seat’. The basic problem with ‘Mala Kahich Problem Nahi’ is the screenplay. Elsewhere the film is just as good as Vidwans’ previous works in terms of craft & technique.

But as it is believed ‘a good script’ is essentially important, the overall film suffers due to it. The story is of a couple who got married in a hurry. And then after a few years & having a child they realize there’s something wrong between them. The husband (Gashmeer) is a man of less words & that is the major conflict of the film, his wife (Spruha) can no longer go through with the ‘auto-pilot’ (as they say in the film) mode on in their life. Suddenly in the middle of this, arrive their parents! Yes it was a love marriage & both parties (families) had a unpleasant history together. So then the mother (Nirmiti Sawant) of the husband initiates an act of redemption, by deciding that all of them will spend a few days in Konkan where the other party resides.

This idea (of shifting this film to Konkan) is not really out of logic, but it is certainly ambitious. And that’s where the film starts to struggle. Countless characters & tracks are introduced & we keep wondering what has all this got to do with the film we saw in the first half! The thing is this idea could’ve been novel enough only when it had lasted for a while, & the narrative had shifted back to the world where the husband & wife actually belong too. The end of the film becomes as expectedly abrupt & we are left exhausted by the whole exercise the second half makes us do.

Actually the second half isn’t that bad, it could’ve worked in a different context. It just doesn’t match the first half & the actual conflict of the film. All the character actors (Satish Alekar, Nirmiti Sawant, Kamlesh Sawant, Vijay Nikam & others) who are a part of it have played their parts beautifully & save the film from becoming a disaster. Among the lead, Spruha looks a bit out of sorts & frankly appears unsuitable for the role. Surprisingly Gashmeer gave a better performance, better than anything he has done before! In fact that is the biggest positive from ‘Mala Kahich Problem Nahi’!

The end of this film reminds of Vidwan’s previous film YZ’s end! This film could’ve been better had the second half was developed better on the paper. In the first half, one actor shines in the role of a friend, philosopher & guide to the couple. Vinod Lavekar is that actor who has been working as director in T.V. He is hardly seen in films, the last we saw him was in the video adaptation of ‘Sakharam Binder’ play. Imagine a regular sidekick actor in this role, & the whole spice of that character goes away! The ‘Gaaj Yeta Go’ is very much addictive & has a beautiful soul to it, but only if this soul was reflected in the film, the film could’ve turned better.

As the title goes, ‘Mala Kahich Problem Nahi’ is definitely problematic but is fine for a one time watch or if you are a huge Gashmeer Mahajani fan!