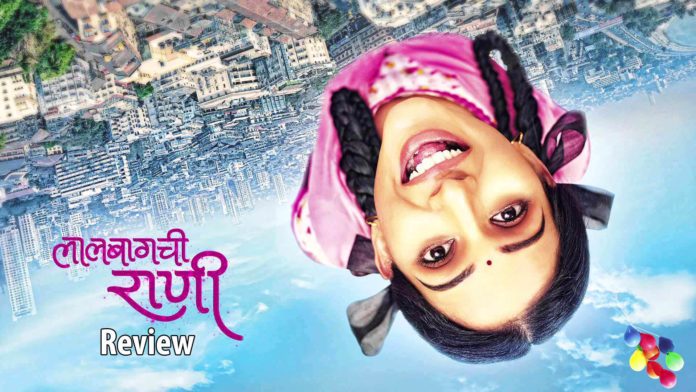 Lalbaugchi Rani is about a 24 year-old girl called Sandhya who is a ‘special child’. She hasn’t really ventured out of her home much. On the eve of her birthday, her parents decide to treat her to a trip around the city. As expected, Sandhya somehow gets lost in the big bad world of Mumbai and encounters a bunch of eclectic characters.

The film is earnest. Sandhya despite seemingly having a comparatively lower intelligence quotient touches the life of the people she meets in the streets and also helps some realise the right path. The basic concept is certainly good. Another major plus is the technical strength. Some fine locations have been chosen for Sandhya’s adventure and they have been shot better than most Marathi films out there.Laxman Utekar has managed to assemble a pretty fine cast as well.The film does have some adorable moments and also makes you laugh at a few places.But still,it doesn’t entirely work due to two main reasons: Over the top acting by the lead and unconvincing scenarios.

Now, Veena Jamkar is certainly one of the better actors in Marathi film industry. We have seen in films like Vihir, Valu and Gabhricha Paus before that she has the ability to effortlessly slip into a role. Lalbaughchi Rani has to be the role where she has had the most scope to showcase her skill, but, rather sadly, I felt she overdoes the mannerisms of a girl with the problems her character has been shown. So when the main lead itself doesn’t impress, it certainly becomes difficult for the film to touch you. Maybe the director also has to share the blame here as Veena is usually known for her nuanced performances. He must have extracted the desired performance from Veena which comes across as a little over the top.

Another issue I had with the film was that the various scenarios in which Sandhya (or Lalbaughchi Rani like she calls herself) are rather unconvincing. Veena’s acting is so on the face here that you can make out from a distance that there is something unusual with the girl. However, the characters on the streets that she runs into seem oblivious to her mental problem. The conversations she has and the way she influences these characters isn’t very easy to believe. There are also some logical loopholes like Sandhya not being shown tired at all despite roaming around the city all day, but those can be ignored.

Despite the earnest effort, the film doesn’t work entirely due to the lead actor’s performance and unconvincing scenarios.