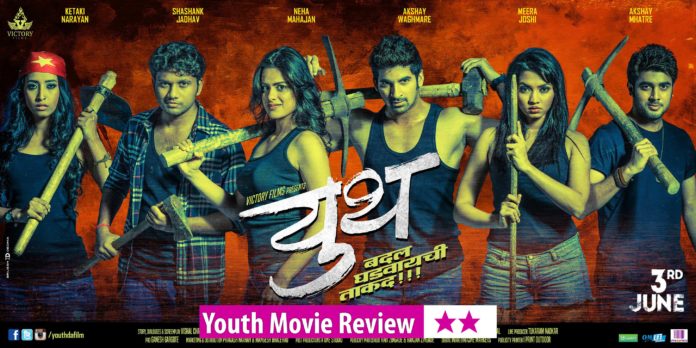 Ask any budding filmmaker and he won’t hesitate to tell you that to find a producer for a film is one hell of a task. And to get it to release is an equally difficult task. Some films are so amateurishly made at nearly all levels, that you wonder that how they got made and even released in the first place; Youth is that kind of a film. It is a rather poorly made film, but you cannot discount the noble intentions.

The film tries to throw some light on the drought situation in the state.A group of mostly privileged college kids plan a trip to a beach side resort in their vacations. Yuvraj, our protagonist, and also the wealthiest guy in the group is the son of a state minister. During their trip, the wealthy urban kids accidently encounter the drought situation in first person. Having only seen the drought condition from the comfort of their homes on the tv, they are all deeply disturbed by the massive disparity. The conscience of Yuvraj awakens and he decides to do all he can to help the impoverished and troubled villagers. The rest of the gang also joins Yuvraj in his effort. Their work gains popularity and also media attention. This has repercussions on the politics of the state and affects Yuvraj’s father directly. Youth then has a major twist in the plot.

Youth does have noble intentions of putting into focus the plight of the drought stricken rural Indians and the measures that can be taken to avoid recurrence of the drought. But the film goes about doing this in a rather preachy manner. There is a lot of talk in the film. Andto make it worse the acting is uniformly poor by the main actors apart from Vikram Gokhale and Satish Pulekar. It is also a poorly made film. The staging of the scenes is so poor that very few even hold your attention.Despite the director also editing the film, the film isn’t sharp as expected. After the film ends you do get a feeling that disservice has been done to such a serious and relevant subject.

The film does disservice to a serious subject like drought, with its bad filmmaking and poor acting.