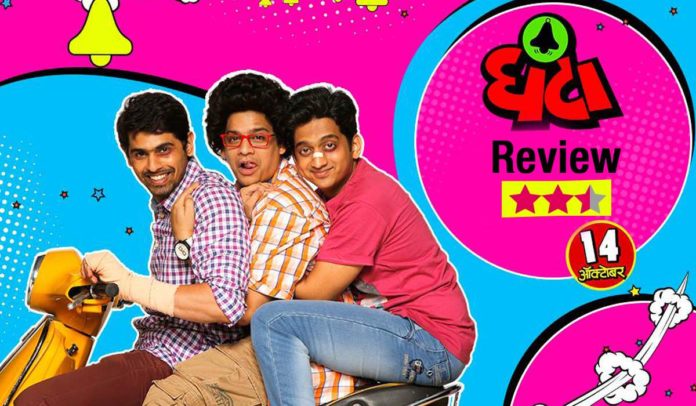 Ghantaa belongs to a genre that hardly has a history in Marathi, but has many examples in Bollywood & of course Hollywood. The most direct comparison could be well made with Aamir Khan’s Delhi Belly. Though the basic plot is common in these two films there is one significant difference. The three leads in Delhi Belly have a darker, realistic edge to them whereas here Raj (Amey), Umesh (Saksham) & Angad (Aroha) are cardboard cut outs. Though this is situational crime comedy, you still need interesting lead characters.

The actors though succeed in doing their jobs. The rest of the cast that has Pushkar Shrotri & Kishore Kadam as leaders of two gangs (one of which is political) are fabulous as always. The character of Murli Sharma needs a special mention. He has been established pretty well & brings in the essential unpredictability in this “Hira Kahan Hain” mystery. Though it could have been more justified if they had used him efficiently in the climax. Another stock character will stay memorable is that of a simple secretary (Pushkar’s) who is not bothered about the conflict at all instead he simply wants to go home early.

Ghanta is directed by a first timer, who has no background of this industry & deserves a lot of credit because he has genuinely made the film he wanted to make. Because there is nothing in the film that has been forcibly added to please any specific lot of audience. But throughout the film his inexperience is evident. Still it will be exciting to see what he comes up with when he brings his second film.

Visually Ghanta experiments a little too much & unnecessarily, the same applies to the omnipresent background score. However there’s a unique exception in a deliberately pretentious (& satirical) sad romantic song titled “Unbreakable” voiced by Hariharan. It works well in this setting. We would have actually loved a similar approach to the lives of these three characters especially in the first half.

The fate of Ghanta (in terms of box office) depends on those huge numbers of Amey Wagh fans. Importantly these fans also somewhat represent the new target audience of popular Marathi Cinema. The right amount of hype has been created by the Ghanta team. And if they watch Ghanta they’ll definitely enjoy it.

Ghantaa is enjoyable & definitely worth a watch, the errors are there but they won’t hit you on the face. If you belong to a certain section of young audience who are still aloof from Marathi Cinema Ghantaa is worth to start with!