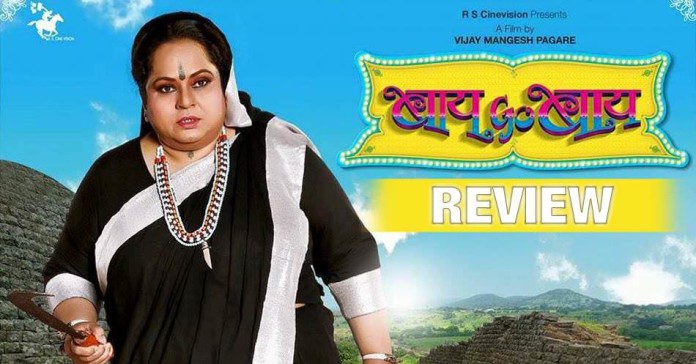 Marathi cinema has had a history of what are known as ‘cheap comedies’. From the legendary Dada Kondke films to the very popular Ashok Saraf-Laxmikant Berde films, there has always been an audience for crass slapstick humour in Maharashtra. Though, unlike the 90s, there is certainly a decline in the domination of such films in the last decade or so. But there still definitely is an audience for such a brand of cinema. Bai Go Bai is targeted towards that audience.

The start of the film, though expectedly over the top, does promise a somewhat different plot for what is basically a loud slapstick comedy. Baayjoakka (Nirmitee Sawant) rules the village like her own fiefdom. She holds a grudge against all men. Moustaches are not allowed to be grown; chores are the responsibility of the men only; husband and wife do not sleep in the same room. Gender stereotypes are reversed and it seems the screenplay plans to exploit some humour from this rather misandrist setting.

It does tread along this path for a while, but, soon enough, predictably creeps in – Baayjoakka, a widower, has a young and beautiful daughter and, even more predictably, she falls in love with a young man despite her misandrist upbringing. The two then go on to out-wit Baayjoakka and douse the raging flame of hatred for men in her.

Frankly, I found it very difficult to sit through this film. There was hardly a moment I wasn’t squirming in my seat. There were just one or two moments I caught myself chuckling, other times the loud and crass humour was testing my nerves. I couldn’t help wondering whether these kinds of films still work.

The acting was quite mediocre all over. Nirmitee Sawant, as the matriarch, does look the part but her miniscule role makes little difference. It would have made the film a tad bearable only if the lead actors were any good. But that isn’t the case either. Nayan Jadhav, as the boy who wins Baayjoakka’s daughter’s heart, at least has a breezy screen presence. But Sheetal Pathak as the daughter just cannot act. Vijay Patkar is up to his usual antics that have never amused me.

Quite irritatingly, there is absolutely nothing in this film that works. The romance is silly and the plan to out-smart Bayjooakka is even sillier. The screenwriter does seem to think quite lowly of his audience to have come up with this nonsense. He can also be held insensitive for trivialization of an issue as serious as child molestation. Lesser said about the music the better.

Bai Go Bai is a typical cheap comedy that has absolutely nothing working for it. Despite promising a somewhat fresh setting it soon slips into a predictable plot. The screenplay is silly and also trivializes the serious issue of child molestation.