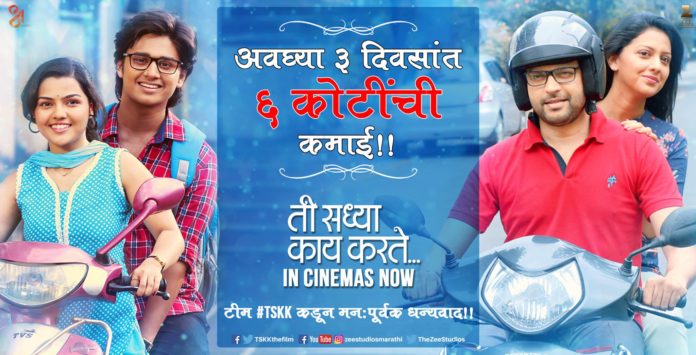 Zee Studios’ ‘Ti Saddhya Kay Karte’ has turned out to be 2017’s first big success story for Marathi cinema. The magical romance in this Satish Rajwade directorial seems to have casted it’s spell on the audiences of Maharashtra!

In simply 3 days i.e 6th Jan to 8th Jan ‘Ti Saddhya Kay Karte’ has captured the box office & has collected over 6 crores! This film is a fine case study for filmmakers & producers all around India that if you give good content & promote it efficiently the audience will respond.

Last year Ankush Chaudhari gave us a well-made hit film like ‘Double Seat’. Since then Ankush is consciously making those choices which are both artistically good & appealable to the audience. This film also became popular for two debutants Abhinay Berde & Arya Ambekar, but the audiences have equally loved the little Hruditya & Nirmohee. Tejashri Pradhan was also refreshingly pleasing in this film & we want her do more films now!

The music of ‘Ti Saddhya..’ is making the audience fall in love all over again. The title of this film was considered unusual at first but it started a viral trend on social media where everyone was asking only one question ‘Ti Saddhya Kay Karte’ & now we have the answer!