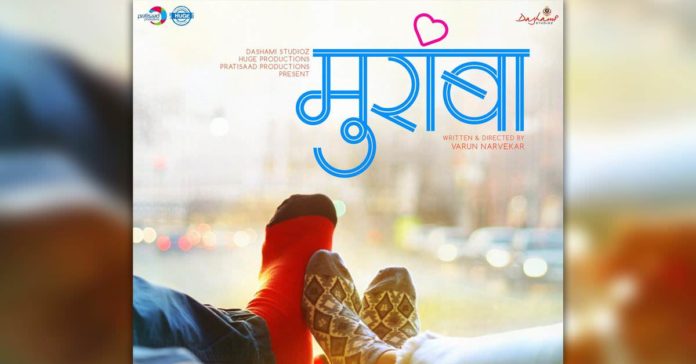 The summer season always reminds us of the delicious guilty pleasures we had growing up. The summers represent different kinds of pickles, sweet & sour delicacies to different kinds of ‘Murambas’ prepared by our grandmothers, mothers & other elderly women of the house. The reason we are reminding you about all this memories is because of an upcoming Marathi release this summer season, a film titled ‘Muramba’!

Presented by Dashmi Studios, Huge Productions & Pratisad Productions ‘Muramba’ is a film directed by Varun Narvekar. The official first poster of this film was recently launched on the social media & it has made the audience & the other artists curious. Varun Narvekar has been working under acclaimed Marathi filmmakers Sumitra Bhave & Sunil Sukthankar. This is Varun’s debut film as a director.

The poster suggests the two lead characters having a fun time in the midst of some chaos (maybe traffic). The heart logo in the title suggests it’s a love story. With ‘Coffee Ani Barach Kahi’ our audiences proved that they are very much ready for a modern, subtle take on romance & hopefully ‘Muramba’ will take forward from where it left or create a new path of its own for Marathi cinema.