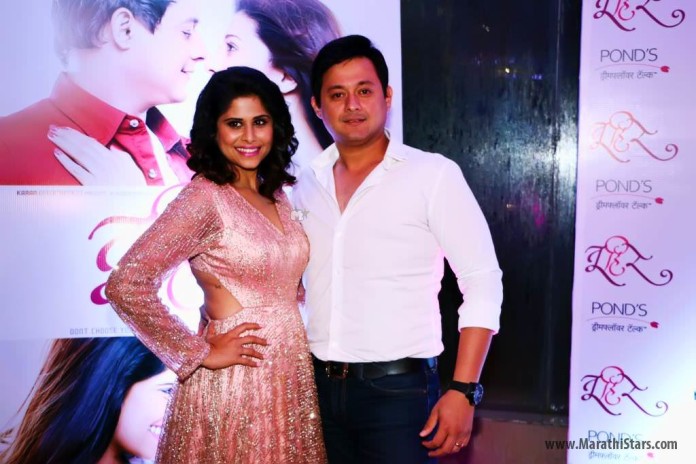 Music launch of most awaited romantic saga Tu Hi Re was a scintillating event. The film stars Swapnil Joshi, Saie Tamhankar and Tejaswini Pandit in lead roles. The film is directed by Sanjay Jadhav and music is by Amit Raj, Pankaj Padghan and Shashank Powar.  The event became more special with the live performances by Adarsh Shinde, Amit Raj, Vaishali Samant, Urmila Dhangar and Sayli Padghan.

The album contains songs for various moods and according to the situation of the film.  The lyrics are penned by Guru Thakur. “Sundra” has been picturised on Saie and Gulbachi Kali, a wedding song in picturised in Swapnil and Tejaswini. Sundra is sung by Adarsh Shinde, and Gulabachi Kali has been sung by Vaishali Samant, Amit Raj and Urmila Dhangar. Tola Tola’s playback is given by Amit Raj and Bela Shende. Nako Nako is sung by Sayli Padghan. Hansika Ayyer has lent her voice for Ek Chaan olakh- penned by Mandar Cholkar. Adarsh Shinde will be again heard in Jeev Ha saang naa.

The story of the film is written by Arvind Jagtap. Cinematography is by Prasad Bhende.

The film releases on 4 September all over Maharashtra.