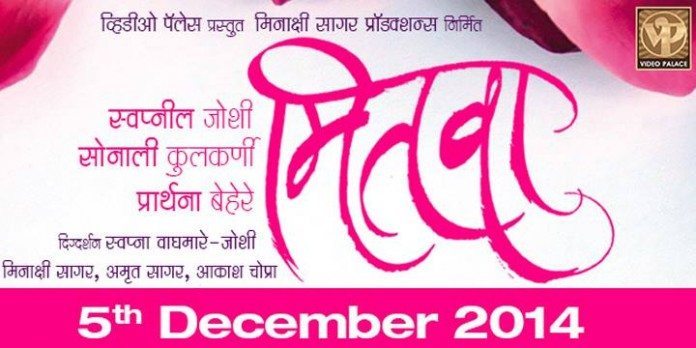 Meenakshi Sagar is all set to warm up the winters for the Marathi audience with her debut Marathi venture ‘Mitwaa’. Starring Swwapnil Joshi, Sonalee Kulkarni and Prarthana Behere, ‘Mitwaa’ will hit the theatres on December 5, 2014. The film will see the renowned Marathi actors Swaapnil Joshi and Sonalee Kulkarni sharing the screen space for the first time on big screen. Their chemistry has already become the talk of the town.

Meenakshi Sagar Productions film ‘Mitwaa‘, presented by Video Palace, is one of the most awaited film of the year. The film is produced by Meenakshi Sagar, Amrit Sagar and Akash Chopra and Swapna Waghmare-Joshi is directing the film. Music is the highlight of this love story. The magical musician trio Shankar-Ehsaan- Loy have composed two songs for the movie. Music directors Nilesh Moharir, Pankaj Padghan and Amitraj have each composed one song for the movie. the song ‘Savar Re’ composed by Nilesh Moharir was first heard at the finale of Lux Jhakaas Heroine and the song has already generated a lot of interest about the movie among the audiences.