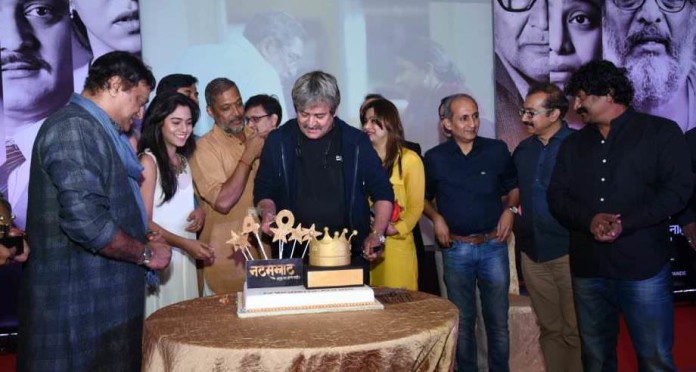 ‘Natsamrat… Asa Nat Hone Nahi’ is still running successfully in theaters after its blockbuster opening on 1st January 2016. Natsamrat has collected 40 crores on box office and it is still running strong in various parts of Maharashtra. Natsamrat has become highest grossing movie in the history of Marathi cinema. On the occasion of this proud moment Natsamrat team organized a success party. The star cast of this movie and other celebrities from Marathi cine industry were present for this party. The list included Nana Patekar, Mahesh Manjrekar, Mrinal Kulkarni, Ankush Chaudhary, Manasi Naik, Vandana Gupte, Adinath Kothare, Samit Kakkad and many more.

However, the biggest announcement of the evening was: Natsamrat remake in Hindi. This announcement has already created buzz among film industry. Also, it is said that Amitabh Bachchan will be a part of this Hindi remake.

In this success party Nana Patekar said, “Earning money on the box office is important but for me what is more enthralling is people are loving and appreciating Natsamrat. I have given so much  for this movie and if I have to do a new movie I have to start from zero.”

Mahesh Manjrekar said, “I would like to thank everyone who is directly or indirectly responsible for the success of Natsamrat. For me, this film is a milestone in my career and I still remember the struggle which we went to complete this film.”