Jhakkas entry, solid dance moves, awesome song-music, colorful combination of costumes & accessories and Ankush Chaudhary bas aur kya chahiye this is outstandingly enough for everyone.  The much awaited poster and title track of upcoming Marathi movie ‘Guru’ has been unveiled now audience can enjoy the beat of Guru’s song. 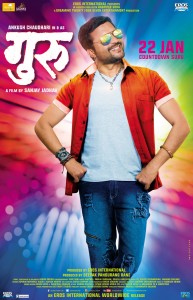 After Daagdi Chwaal Ankush Chaudhary is back again in action mood in his next movie ‘Guru’ directed by Sanjay Jadhav and produced by Eros International, Bagpiper Soda and Dreaming Twenty Four Seven.  In this event title track ‘Hu Bade Jigarwala…’ and brand new poster has been unveiled with the Guru Team and media.  ‘Hu Bade Jigarwala…’ song written by Sachin Pathak (Yo), sung by Aadarsh Shinde and music composed by Amitraj.  Poster is the main attraction of every movie, so every poster should be attractive and Guru’s poster is almost attractive and catchy so while watching poster everyone can easily try to pose like Guru Ankush Chaudhary.  Poster credit goes to Publicity Designer Sachin Suresh Gurav.  Sachin is the amazing man with the full of creativity in his mind.

‘Guru’ is releasing on 22nd January 2016.  This movie will give you awesome start of the New Year.