Recently the first shooting schedule was completed for the upcoming “Copy” at Pen area. The film is directed by Hemant Dhabade and Dayasagar Wankhede.

The film is produced by Ganesh Patil and Shankar Mhatre under the banners of Shri Mahalaxmi Creations. The story and screenplay has been written by Rahul Salve along with the director duo. Dayasagar has written the dialogues. Art direction is done by Sandeep Kunchi korave and Santanio Tesio has done the cinematography for this film.

The next schedule of this film will be arranged very soon on various locations. The film is expected to release by this year end. 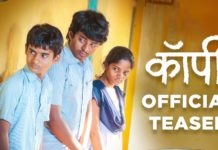