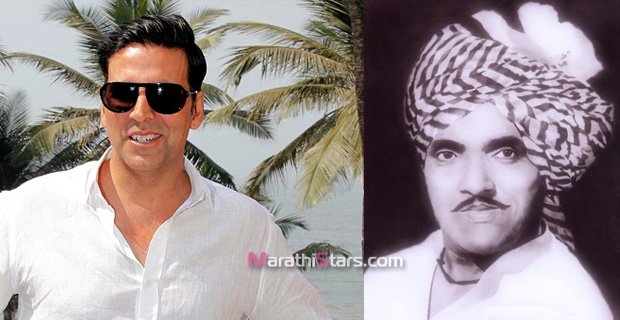 The Khiladi of Bollywood, who has ventured in producing regional cinema, is now also exploring Marathi literature, it seems.
Sources claim that Akshay Kumar has acquired the rights to the biography of legendary Marathi actor Dada Kondke who was famous for his double entrende jokes and suggestive film titles) for the purpose of making a movie on it. The biography titled Ekta Jeev had been written by Anita Padhye many years back and the author had claimed that despite his sense of humor and ready wit on the silver screen, Dada was not happy in real life.

The author Anita Padhye confirmed the news. She said that there is a development on her book and a film will be made by Akshay Kumar. The book was written in 1999 on the basis of her interaction with the late actor. She has total 80 audio cassettes which had 90 minutes long conversation with the actor. Dada Kondke was famous for his striped shorts and a unique style of dialogue delivery , one-liners and comic gestures. But in real life Dada wasn’t a happy man.

The official announcement hasn’t made by Akshay and Ashwini yet. But the author has confirmed the news.