Pune 52, a new-noir film in Marathi has become a cult film since its release. Nikhil Mahajan, the director of this film recently announced on social media that the team is working on a sequel of this film. 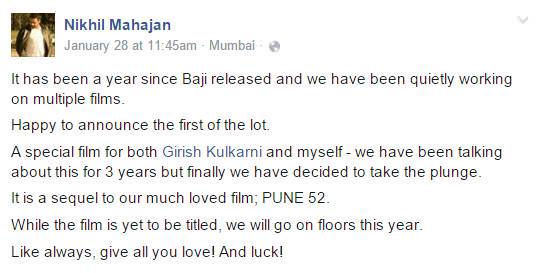 Pune 52 was released in 2013 and starred National Award winning actors Girish Kulkarni, Sonali Kulkarni and Sai Tamhankar in the leading roles. Though the film could not do wonders on the Box Office, it gathered critical acclaim and cult fan-following. Girish had also produced this movie and also written dialogues for this film. This was a debut directorial venture for Nikhil Mahajan who later directed Baji- a superhero film. It will be interesting to see what topic this team will decide for the sequel for Pune 52.

Pune 52 was a story of a private detective set on the backdrop of early 90s in the city of Pune. The film was set in 90s when liberalization has changed not only economic policies but day-today lives for Indians. The film tried to capture this increasing consumerism and loss of pre-liberalization values from the society through this enthralling narrative.

The star cast and the title for this film has not yet been announced. We will keep you updated with some more news about this sequel.