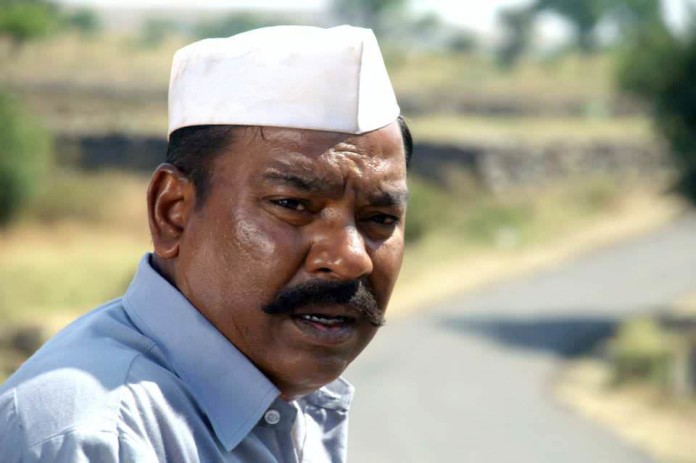 Kishor Kadam who is known for his creatively excellent roles in films like ‘Natarang’, ‘ Nilkanth Master’, etc. and is also a popular lyricist with the pen name Soumitra now readies himself for more glory in a much festival appreciated film and also in US and other international arenas called ‘Partu’.   We spoke to the talented multi-faceted actor at the press meet of Partu.   Here are a few excerpts.

What made you accept ‘Partu’?

First of all I liked the graph of the role from a young man to an elderly man and his relationship with his adopted son and also the shooting of the film  in places like Rajasthan and also the opportunity to go to the US since the producers are from the US and we got a very good response there and also the facilities provided to us were of international class.

I play a poor Marathi farmer called Laxman in Ahmednagar village who lives with his wife played by Smita Tambe and are childless but one fine day a lost boy from Rajasthan is found by Laxman who decides to rear him till his family is found much to the annoyance of his wife but Laxman raises the boy like his own and names him Prithvi who also develops a loving relationship with Laxman and his wife. But once on a pilgrimage to a North region they have to come across Prithvi’s village and they find Prithvi’s family and want Prithvi  to go to his natural family but things then take a turn.

Our director Nitin Adsul is a very talented director and based in the US and it is a true story which was told to Nitin when he was young and he had kept the story in mind and drafted the story of Partu and selected an excellent cast like Smita Tambe, Saurabh Gokhale who plays Prithvi,  and Navni Parihar who plays his Rajasthani mother, and a good new face Gayatri Soham, Anshuman Vichare and Raja Bundela.

What are your expectations from the film?

I am eagerly awaiting the release on December 4 since it has won me A Best Actor award  in South Asian Film Festival held in Washington DC  along with the Best Feature Film.