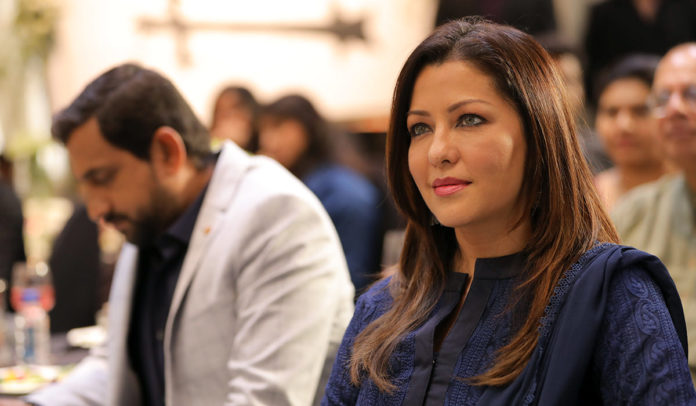 Doctor turned model and model turned actress Aditi Govitrikar is again living a doctor’s role, this time in a new Marathi film ‘Smile Please‘. The film also stars Mukta Barve, Lalit Prabhakar & Prasad Oak! We made her open up about this new film, role and also about Marathi cinema!

Ringa Ringa (2010) was your first Marathi film. And now you are in Smile Please. How do you think Marathi cinema has evolved over the years?

I think Marathi cinema has always had powerful content! Yes there was a time when ‘comedy’ had taken over but after that superb content has been continued! It has been a journey of ups and down but still all genres are working, maybe except Horror in my understanding. Different slice of life stories too are working for the audiences.

You have worked with Vikram Phadnis (the director of ‘Smile Please’) as a model. And now you are working with him as a actor. How is the director in him different than the fashion designer in him?

He has thought me everything as a model. From how to pose to how to walk on the ramp. And as a director his unseen side was came in front of me! He is super talented! I asked him why he didn’t direct for so many years! The way he tells stories, emotions and his understanding about relationships, not in a dramatic way but in a very subtle way he shows all of that on the screen. It touches everybody’s heart!

What is the importance of your character in the story of the film?

As you can see in the trailer I play a doctor in this film. But she isn’t just a doctor to Mukta’s character but also a close friend of her. They go back together from their college days. So there are many aspects to the character both as a friend and as a doctor! I can’t reveal beyond this!

Which are some of your favorite Marathi films?

(Director Vikram Phadnis prompts ‘Hrudayantar’) Yes that is one of my all time favorite films! But Deool, Anandi Gopal and many others are among my favorite films!