Usha Jadhav earned numerous awards and accolades for her film “Dhag” After entering Bollywood with “Bhootnath returns” Usha has decided to go international. She will be seen in a completely different avatar in “Salt Bridge” The Indian-origin Australian Abhijeet Devnath will be directing her in this film. Her co-star will be Rajeev Khandelwal. The film has been shot in Australia. 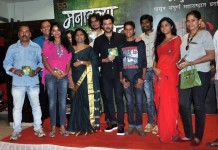