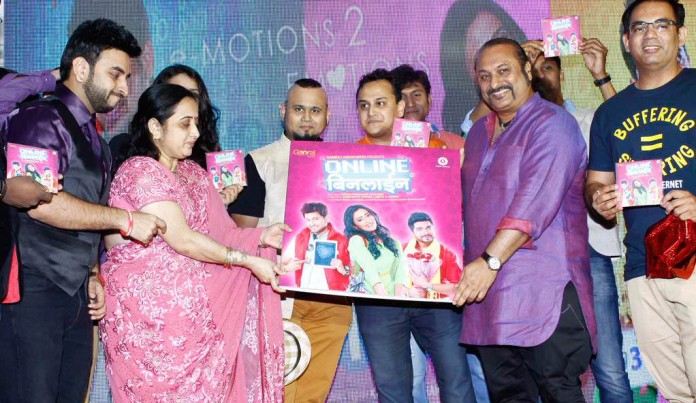 Online Binline launched its Music Album with the entire cast and crew of the movie including the leading actors Siddharth Chandekar, Hemant Dhome and debutant Rutuja Shinde. The music was unveiled by Music Composer Leslie Lewis.

The film directed by Kedar Gaekwas and produced under the banner Ganraj Associates. ‘Online Binline’ is a quirky film inspired by increasing Internet addiction in today’s youth. The album consists of various upbeat and peppy numbers which will appeal and connect to the younger generation. The highlight of the album is a remake of the hit Pop song ‘Oh Ho Kay Zhala’ that was released in 2001 which featured Lesle Lewis & Hari Haran. Lyrics are given by Mandar Cholkar and Shreyash Jadhav who has also rapped in the song, whereas the music direction is done by the three stalwarts of music domain: Hrishikesh Ranade, Jasraaj Joshi and Saurabh.