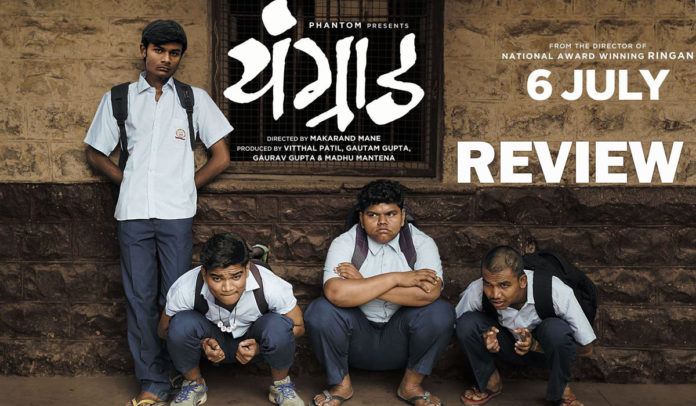 Directed by Makarand Mane of ‘Ringan’ fame & backed by ‘Phantom Films’ the iconic indie film studio of Bollywood (& Overall Indian cinema), ‘Youngraad’ is a film that is solid on many levels starting from the casting, to the use of craft (technical), use of background score & the overall direction of the film. What it also manages to do well is inhibiting the ‘Sairat’ influence in a positive way. But the film has issues with the narrative, which hamper the overall takeout for the audiences.

The film begins with a flashback clarifying the protagonist of the film as someone who has got over a dreadful phase in his life & has now grown to be a wiser person. The problem with this device is that it takes away some of the ‘thrill’ in a film that had some traits of a crime thriller. The story revolves around four school going mid teenagers living in the city of Nasik. The first half mostly depicts their friendship through different incidents & the romantic track of the main hero of the film!

The romantic track clearly has a ‘Sairat’ influence but in a very healthy way. It makes us believe whatever it depicts. This in fact is Youngraad’s biggest strength. It never takes away the believability. Except a jail sequence in the second half which also stars Sharad Kelkar in an unnecessarily filmy mode.

As the trailer reveals these four friends start working for a local goon who is soon venturing into politics. This transition of normal fun loving kids to goons of an aspiring politician is almost very easy but still convincing. Then due to some circumstances they decide to leave all this & become clean. This conflict of the film arrives almost at the interval point. The second half then takes a completely new turn. Now this transition both from the narrative point of view & the character transitions aren’t smooth. The film develops quite a few problems in the second half. The biggest being the track of our protagonist in prison. The believability suffers here. However, even in these moments the performance of the lead actor keeps us interested.

Once the protagonist is out from prison the film deals with the aftermath in a bit formulaic way. But it let’s the protagonist dwell around the proceedings deliberately purposeless. We see him roaming around the sub-urban city clueless & with a grim on his face. These little sad moments involving the protagonist & his friends make the second half interesting. There are many errors & plot points left abruptly in the second half, but because of the film’s emotional connect we are affected by the film.

After ‘Ringan’ director Makarand Mane approached a completely new story & partially succeeded in creating another moving film experience. But more work on the writing of the film could’ve taken ‘Youngraad’ to similar heights of ‘Ringan’. However one could easily notice that as a director Mane has still improved his craft, especially the way he has used visual language in ‘Youngraad’. The young actors of the film have given good performances especially the lead actor. Shashank Shende & Savita Prabhune are probably the only well versed actors in the cast & they too have given superb performances. Savita Prabhune has been seen in very few films but she is impressive in all of them, last she was seen in ‘Jaudya Na Balasaheb’.

In terms of the commercial value ‘Youngraad’ has everything that today’s youth Marathi audiences would connect with. Including humor & beautifully composed & shot songs. It shouldn’t go unnoticed just because it hasn’t been promoted well!