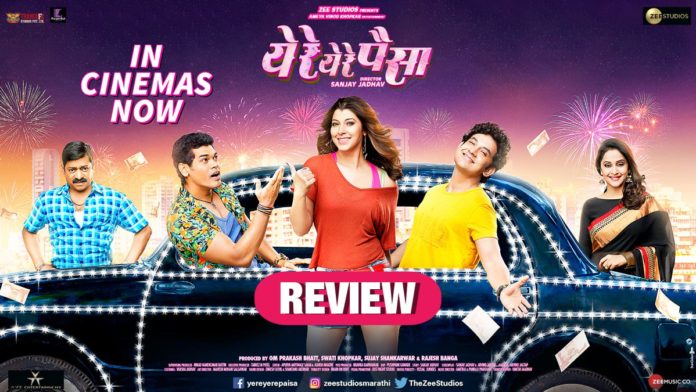 Ye Re Ye Re Paisa will certainly manage to give you a few laughs. But the overall complications make the film difficult to sit through. Sanjay Jadhav before his Duniyadari days made two dark thrillers (Ringa Ringa & Checkmate) which could stand head & shoulders above other Marathi films in that genre. This director is capable of pulling off different visual & cinematic feats if he wishes too. But his obsession of making what sells has made him restrict his abilities.

Ye Re Ye Re Paisa in parts can remind us of any random south Indian movie dubbed in Hindi, telecasted on every movie channel these days. And in parts it also reminds us of 90s Bollywood masala movies. The problem is not what it reminds us of! The problem is it doesn’t add anything to them! The plot is an excuse for a comedy of errors. However the errors on their own need to have some strength to derive situational comedy out of them. This isn’t the case.

At some point in the first half we are hinted that the film would now turn towards the ‘heist comedy’ genre. But the heist part is tastelessly silly & never really explored in depth. So the film relies almost completely on characters & actors playing them to win over the audiences. Sanjay Narvekar as ‘Anna’ a loan recovery agent cum gangster succeeds to some extent in getting our acceptance. Sadly Siddharth Jadhav who has a terrific sense of comic timing & has been a part of quite of few crazy comedies helmed by Kedar Shinde doesn’t make any impact. Umesh Kamat is usually a decent actor but he doesn’t have a lot to do in the film. Maybe a love track would have made Umesh a little more important to some audiences. Tejaswini Pandit has many limitations as an actress, limitations which come in way of comedy! Anand Ingle plays a formulaic supporting comic character seen usually in those dubbed south Indian movies. Bijoy Anand seen long back in a few Hindi films plays an interesting character which needed a better treatment. Mrinal Kulkarni’s character though important to the film, has little to do.

The film is strangely edited to speed up the narrative. An experiment (I am not sure if that’s the right word) that only confuses the audiences rather than amusing them. It’s again a trait from south India, where a few dedicated fans of those films believe that too much editing is good editing! One of the positives of the film is it’s visual feel though a more serious narrative could have really complemented it. ‘Ye Re Ye Re Paisa’ definitely had potential if it had some sort of situational humour in it & a better written screenplay.

The film used different color grading for an important narrative scene in different ways representing the change of perspective. Surprisingly it is really well executed & appears as inventive as it sounds. But again all of this deserved a better film to belong too. Sanjay Jadhav’s Duniyadari was in my opinion a poorly directed film, but it had it’s strength in the content through the original novel. His other films after Duniyadari were average in every way. Ye Re Ye Re Paisa is a film that is disastrously fast paced & loud, yet there are few moments that tell it had potential. An ideal commercial entertainer doesn’t necessarily need a thought provoking message or a moral of the story & it can work on simply moments that are entertaining & have a repeat value to them. Ye Re Ye Re Paisa on the whole is an exhausting experience, a one line narrative that was narrated as if the film was ‘Interstellar’ or ‘Inception’.

If you’ve seen all the promos & the trailer of the film you’ve already seen the better comic punches. The rest of the punches never really work making this journey full of sound & fury signifying nothing!