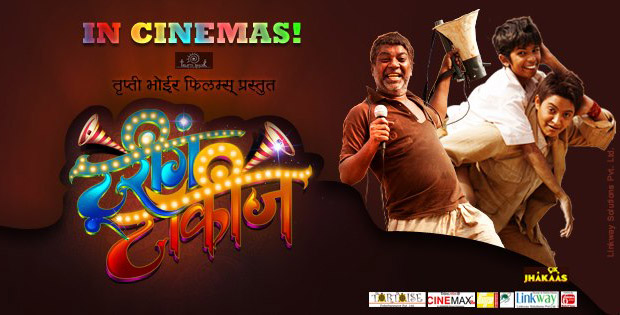 The film throws light on the culture of touring talkies – film screenings inside tents (tamboo), which is slowly dying. Chandi’s touring talkies is one of the rare ones still surviving in Maharashtra.  She and her brother Babya (Chinmay Sant) take great pride in showing films in their tent, which has been their family business since decades.

But their business is threatened due to some foolishness by Chandi’s drunkard father Babu (Suhas Palshikar). Chandi sees a ray of hope when filmmaker Avinash (Subodh Bhave) arrives in their locality to screen his film in the tents.

With Gajendra Ahire’s Touring Talkies, Marathi Cinema can boast of paying tribute to Indian cinema in its centenary (100th) year in such a heartwarming manner that the ‘cinema chya keeda’ residing inside its audiences will make them feel mighty proud. The experience becomes even greater when you watch the movie in a tent (like I did).

Ahire does the painstaking task of presenting every minute detail of tent culture cinema with remarkable ease. The viewer gets quickly involved with the proceedings with one amusing moment following another. But despite that, the film stays miles away from being a documentary. The characterization and narration with the use of simple conflict elements make sure you instantly feel for the characters and their struggle to keep cinema alive in their tent.

From the flipsides, there comes a moment in the second half when the film threatens to be a drag. It is also strange to see Avinash’s ‘art film’ getting accepted in a place where only hardcore commercial films are acknowledged, despite the special offers for the audience. But these points won’t hurt you due to the delightful pre-climax, climax and the overall heartwarming nature of the film.

The soulful background score and Amol Gole’s artistic camerawork provide apt support. Ilayaraja composed English tracks suit the subject but there definitely was scope for a Marathi song considering it’s a Marathi film. But special mention should be given to the art director for bringing the touring talkies culture alive.

Trupti Bhoir displays an example of complete dedication and hard-work in her performance. She shows the tough as well as emotional side of the character brilliantly. Subodh Bhave perfectly fits in the shoes of a realistic filmmaker and gives a mature act.

An unusually hilarious performance is presented by Kishore Kadam. It’s a pleasure to see him announcing even unimportant details. After Jana Gana Mana, Girish Sant once again gives a smile-producing performance. Milind Shinde and Suhas Phalshikar provide perfect support while Neha Pendse shines in a cameo.

Overall, Touring Talkies will touch the hearts of all those who are fascinated by the magical world of cinema. The film desperately deserves some rapid word-of-mouth to succeed at the box office. It is highly recommended to see the film in a tent.